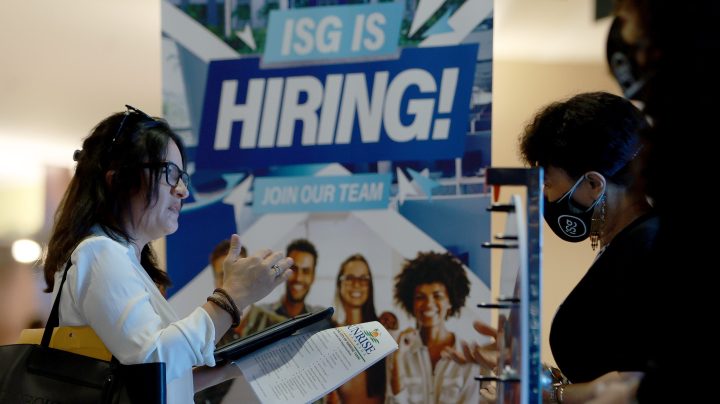 COPY
Employers can gain an advantage in the competition for talent by offering full-time positions, experts say. Joe Raedle/Getty Images

How ‘bout a look at a bit of unmitigated good news coming out of the June jobs report?

Buried in the Bureau of Labor Statistics’ econo-speak — about a third of the way down — is this sentence: “The number of persons employed part time for economic reasons declined by 707,000 to 3.6 million in June and is below its February 2020 level of 4.4 million.”

These are folks who’ve been able to find part-time work in this labor market but not full-time work that would provide enough income to sustain them economically.

First let’s get a clear sense of who the workers are that the Bureau of Labor Statistics defines as “involuntary part time” or “part time for economic reasons.”

They worked fewer than 35 hours a week, and when asked why, they blamed the economy or said there isn’t enough business at their company, explained Cornell economist and former BLS Commissioner Erica Groshen.

“The economic reasons are unfavorable business conditions, inability to find full-time work and also seasonal declines in demand,” she said.

In short: They don’t want to work part time, but it’s all they can get.

This is a sign of how desperate employers are to hire, said Jim McCoy at global staffing firm ManpowerGroup.

“We have seen an increased demand for full-time hiring,” he said.

Most people looking to get a job or change jobs don’t want to scramble to find two or three part-time gigs and juggle their hours.

“With the additional perks that may come as a result of being a full-time employee, they’ll have a better shot at retaining key talent,” he added.

And some companies that previously tried to maximize part-time employment to save money on labor are now reversing course, said Dave Gilbertson at payroll processor UKG, which is a Marketplace underwriter.

“The reality is, if you have a job that you think is only going to take a few hours to do, that job is just not going to get done in this kind of labor market,” he said.

Because, he said, it’s getting harder and harder to find people who are willing to work part time and not earn enough to live on.