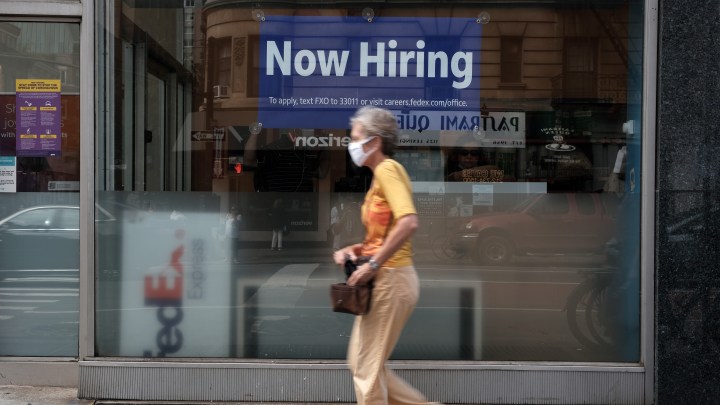 COPY
The number of hires has plateaued. Spencer Platt via Getty Images

The number of hires has plateaued. Spencer Platt via Getty Images
Listen Now

There were just shy of 11 million job openings in this country on the last day of July, according to the monthly ​snapshot of the labor market known as JOLTS, the Job Openings and Labor Turnover Survey, produced by the Bureau of Labor Statistics.

That’s an all-time high and is roughly 750,000 more openings than there were at the end of June. At the same time, though, the number of workers hired into jobs stayed pretty much the same.

So, how does that work?

There’s a lot going on in the labor market right now — a lot of flux, a lot of churn, a lot of uncertainty. It’s not exactly a labor shortage, said Annelies Goger at the Brookings Institution.

“It’s like a real mismatch in where the jobs are and where the qualified people with experience are,” she said.

In some sectors, there aren’t enough job openings, like in construction, education and the arts. And in others, there are too many, including health care and retail and food service.

“An employer doesn’t just want any worker. They’re trying to fit the candidate with what the job entails,” Goger said. “And likewise, a worker doesn’t want just any job.”

With so many openings and so many people looking, she said it’s inevitable that it’ll take a while for everyone to find the right fit. On top of that?

“We are still at the whims of the pandemic,” said Nick Bunker, an economist at Indeed, which is a Marketplace underwriter. There are still a lot of people who aren’t ready to take jobs yet, he said, because of COVID-19, child care issues or both.

There are also signs in job posting data from August on Indeed that some employers in some sectors are starting to pull back.

“Sectors that are really sensitive to the pandemic, so food service, so that’s lots of restaurant and bar jobs … also child care,” Bunker said.

Still, there was a record number of open jobs at the end of July. If employers are having trouble hiring, they should ask themselves some questions, said Erica Groshen, the former commissioner of the Bureau of Labor Statistics.

“Are the wages as high as they need to be? Are the benefits appropriate? What about their working conditions?” she said.

And, she said, are they maybe passing people over who have the skills they’re looking for but not certain credentials — like a four-year college degree?