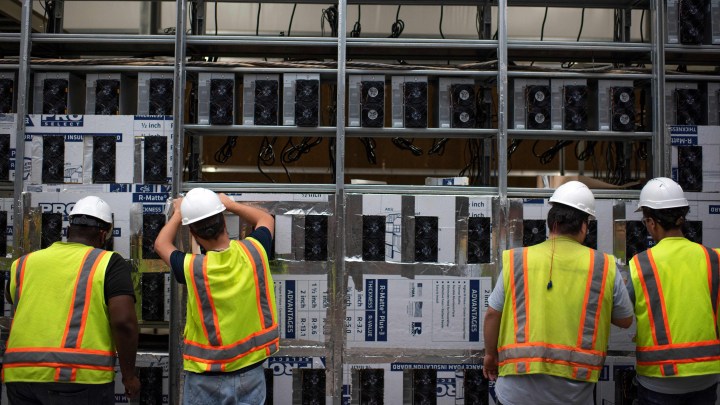 One of the several significant U.S. Supreme Court rulings this week put severe limitations on the Environmental Protection Agency’s power to curb carbon emissions from power plants. But state and local officials are also involved in the greenhouse gas emissions debate.

In upstate New York, for example, a power plant on Seneca Lake has become a focal point of the debate over crypto mining. And on Thursday, state officials decided not to renew an air permit for Greenidge Generation, which burns fossil fuels to mine for digital currencies like bitcoin.

New York has among the most ambitious carbon-reduction goals in the country.

The state’s Department of Environmental Conservation cited those goals in its decision about the Greenidge plant, which came after steep local opposition from activists like Yvonne Taylor of the group Seneca Lake Guardian.

“These cryptocurrency miners are spreading like a cancer across the United States.”

In a statement, Greenidge Generation said it made a substantial offer to reduce its emissions — and said it plans to appeal the decision, which is being watched across the crypto mining industry. And it is an industry, said Colin Read, a professor at the State University of New York at Plattsburgh.

“These are highly corporatized and well-funded companies that are now in mining,” he said. “They’re not the little backyard mines we saw perhaps four or five years ago.”

As the price of bitcoin and other cryptocurrencies plummets, in New York, the industry is also fighting a two-year statewide moratorium on repurposing fossil-fuel burning plants — like Greenidge — for crypto mining.

The decision on Greenidge makes since, according to John Olsen of the Blockchain Association, a crypto industry group. That might come as a surprise, but he said it means a broader moratorium isn’t necessary.

“We have demonstrable proof that these kinds of issues and concerns on the environmental and energy level can be handled administratively,” he said.

Activists, though, say they don’t want to see this continue to be a town-by-town fight.