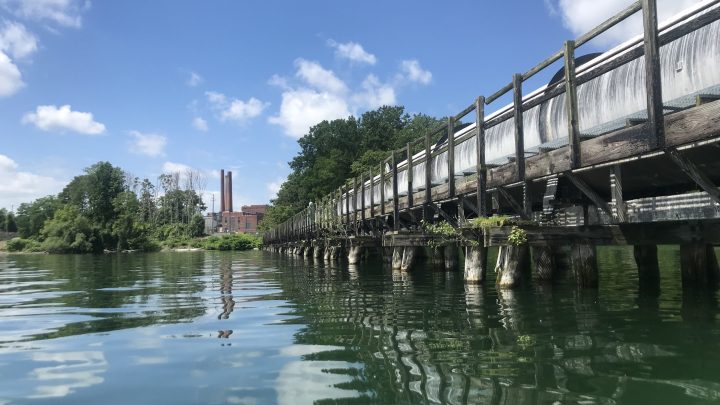 COPY
A large metal tube juts into Seneca Lake. The Greenidge Generation crypto mining facility uses the tube to take in water to cool its equipment. The warmer water is then discharged back into the lake. Lily Jamali/Marketplace

A large metal tube juts into Seneca Lake. The Greenidge Generation crypto mining facility uses the tube to take in water to cool its equipment. The warmer water is then discharged back into the lake. Lily Jamali/Marketplace
Listen Now

These operations use walls of computers. To earn digital currency like bitcoin, they solve complicated puzzles, which verify new transactions. It’s now up to Gov. Kathy Hochul to decide whether to sign the moratorium into law.

Over in Penn Yan, a town on Seneca Lake — the largest of the state’s majestic Finger Lakes — Kim Holtzman grabs a kayak and heads out onto the water, paddling north. Seneca Lake has been part of Holtzman’s life since she started coming to camp here as a child.

“It just means the world to me, the Finger Lakes,” Holtzman said. “It’s where I met my husband. Many of my friends are from here.”

Holtzman and her husband moved here full time about two years ago. “It’s beautiful, and Greenidge has changed that for us,” Holtzman said.

She’s referring to Greenidge Generation, the lakeside power plant in nearby Dresden, which is a half-hour paddle from her house. Just ahead, there’s a giant metal tube that juts out over part of the lake from shore. The plant depends on this tube to to take in water. It uses it to cool its equipment, and then the water is discharged back into the lake — warmer than before. Holtzman and neighbors worry that harms the wildlife here.

They also don’t like the noise. “At night, when it’s quiet, you can hear a low rumbling all the time,” Holtzman said.

For decades, this facility burned coal to generate electricity until it was shut down in 2011 — for good, neighbors thought. Three years later, an out-of-state private equity firm bought the plant and converted it to burn a different fossil fuel: natural gas. Today, much of that energy is being used to mine cryptocurrency.

“All of a sudden, it became bitcoin,” Holtzman said.

A spokesperson for the Greenidge plant says it’s a model for meeting strict environmental standards while creating new jobs. William Talton holds one of those jobs. He commutes from an hour away in Rochester, New York, to work as the plant’s data center crypto lead.

“The opportunity that it gave me and my family was amazing — not only financially, but just the opportunity to experience what is looking like the future with the cryptocurrency and things like that,” Talton said.

But opponents argue the plant’s air and thermal pollution is harming the region’s tourism industry, which draws millions of visitors — and billions of dollars — each year. The bill New York lawmakers just passed would enact a two-year moratorium to block crypto miners from repurposing plants like Greenidge, although existing facilities could keep operating.

Kelles said the crypto industry’s intense energy use will make it harder for the state to meet its stated plan of getting to net zero by 2050. “It is literally going to send us in the wrong direction from our climate goals, which is to get off of fossil fuels.”

Crypto industry groups warn restrictions like the moratorium could drive crypto investors and jobs away from New York.

“New York would be the only state with a moratorium on the books, and I think that sends a very negative signal to an industry that is basically being welcomed elsewhere,” said John Olsen of the Blockchain Association.

Gov. Kathy Hochul has also been criticized for taking money from the crypto industry.

“It’s time for her to stand with New Yorkers and not with the crypto billionaires that are helping to fund her campaign and her lieutenant governor’s campaign,” said Abi Buddington, a Seneca Lake resident organizing against Greenidge.

Hochul’s office said in a statement that “political donations have no influence on government decisions.” She has until December to make a decision.