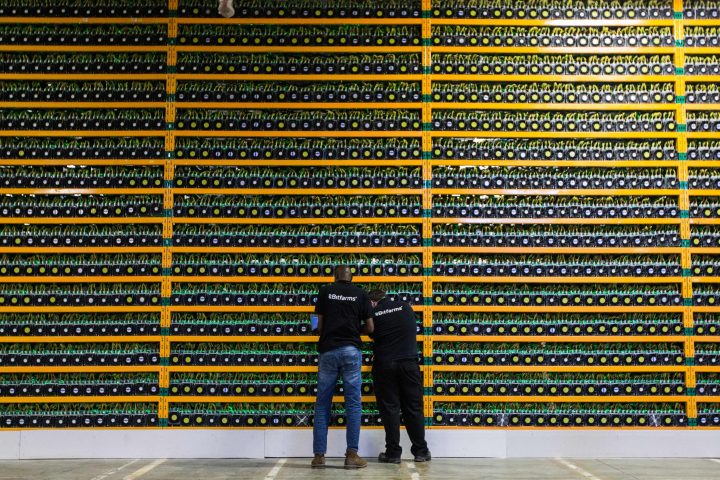 It’s now up to Governor Kathy Hochul to decide whether to sign it into law.

The “miners” are computers that earn digital currency like bitcoin by solving complicated puzzles to verify new transactions.

They burn a lot of energy to do so.

Geneva, New York, is nestled at the northern end of Seneca Lake, a destination that draws visitors in droves, especially this time of year.

Vinny Aliperti, the co-owner of Billsboro Winery, depends on those tourists to keep his business thriving. “We’re a smaller winery. We produce around 4,000 cases.”

But Aliperti worries the region’s tourism industry is threatened by a nearby power plant that started mining crypto here two years ago.

The plant discharges warm water into the lake which Aliperti says affects the grapes grown in the region.

The plant – located just off the shore of Seneca Lake – was bought in 2014 by a company called Greenidge Generation LLC. It runs on natural gas, a fossil fuel.

New York lawmakers just passed a two-year moratorium that would block crypto miners from repurposing plants like this one. The state would use that time to study the industry’s impacts. Assemblymember Anna Kelles sponsored the bill.

“So basically, it’s saying, hands off our fossil fuel based power plants that are retired in New York state,” she said.

Although, existing facilities would be allowed to keep operating.

Kelles said the crypto industry’s intense power use will make it harder for New York to lessen its dependence on fossil fuels and achieve its climate goals.

“Seems like a bad use of our energy as a state,” she said.

But Greenidge’s operators said its emissions would make up 0.2% of the state’s climate emissions target for 2030. And John Olsen of the Blockchain Association said restrictions like the moratorium could drive crypto investors and jobs away from New York.

“That sends a very negative signal to an industry that is basically being welcomed elsewhere,” he said.

Governor Hochul has until December to sign the bill into law.

Correction (June 16, 2022): A previous version of this web story misattributed a quote to Vinny Aliperti.