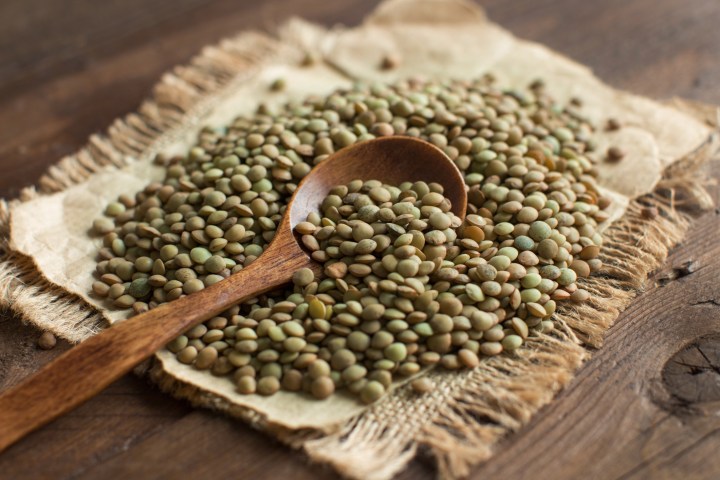 A view of lentils atop a wooden table. Hundreds of consumers say they've gotten ill after consuming a Daily Harvest product containing lentils and leeks. Karisssa/iStock/Getty Images Plus

A view of lentils atop a wooden table. Hundreds of consumers say they've gotten ill after consuming a Daily Harvest product containing lentils and leeks. Karisssa/iStock/Getty Images Plus

Daily Harvest, the vegan meal-delivery service that sells bowls, soups and smoothies, is recalling one of its products after hundreds of people reported illnesses or adverse reactions.

On Monday, Daily Harvest stated on its website that it’s still trying to find the cause of the issues associated with its French Lentil + Leek Crumbles product. It explained that it’s been working with the Food and Drug Administration, state agencies, independent labs and experts to conduct tests.

The company said that 28,000 units of this product were sent to customers between April 28 and June 17, and advised those who have it to immediately dispose of the item. None of its other products have been impacted, according to the company’s website.

Customers on social media have reported that they’ve experienced nausea, headaches, fevers and vomiting. Some have allegedly gotten so sick that they’ve been hospitalized and undergone surgery to remove their gallbladders.

Now, customers are gearing up to take legal action against the company. The law firm Marler Clark, which takes on cases involving foodborne illnesses, has filed its first lawsuit against Daily Harvest on behalf of a resident based in Tulsa, Oklahoma. The firm said about 100 people have retained its services.

How regulated are meal-kit services overall?

Meal-kit services like Daily Harvest, Blue Apron and Home Chef are part of the growing meal-kit market, whose global share is expected to grow to $13.5 billion this year, up from $11.19 billion in 2021, according to the Business Research Company.

These meal delivery services fall under retail food establishments, which means they are exempt from food-facility registration requirements, according to Laurie Beyranevand, a professor at Vermont Law School and the director of the Center for Agriculture and Food Systems.

“It basically means that the regulation falls to state and local officials,” Beyranevand said.

Beyranevand said that when we think of retail food establishments, that typically means restaurants or establishments that sell food directly to consumers. “So like a to-go service, essentially,” she explained.

And with restaurants, while the FDA does do some regulation depending on the size of the company, ensuring the safety of a normal restaurant or fast-food chain falls to the local health department or state officials coming in to inspect those particular establishments, Beyranevand said.

But she said some people are pushing for the FDA to get involved because these meal-delivery services have a national footprint.

Jaydee Hanson, policy director at the Center for Food Safety, said he thinks this sector is not well-regulated, and he would like to see the FDA get more funding from Congress to help the agency do more inspections.

“What we’ve seen is a lot of vegetable-based products having more and more problems. Some of it gets down to where the product is being raised,” Hanson said.

He explained that some vegetables may have been grown near big animal production operations, which could leave runoff in the water supply.

“We are not yet positioned to state specific actions the FDA may take or policies that the FDA may develop, if any, but can assure that we are working internally and will continue to engage externally with all representative stakeholders at the Summit for a path forward,” an FDA spokesperson wrote over email.

Daily Harvest, which launched in 2015 and touts itself as a “clean food” company, was valued at $1.1 billion late last year.

Thomas White, a lecturer at American University’s Kogod School of Business, said that these food poisoning cases could affect any business plans Daily Harvest had for the rest of the year   — like getting acquired by another company or going public.  (White noted that he is neither an investor in Daily Harvest nor a consumer of its products.)

“[Those are] their two avenues, because their investors are going to want them to have some type of an exit strategy at some point,” White said. “If they were planning that in the next six months, well, they might need to delay that a little bit.”

Forbes reported last summer that the company had considered both options. Unnamed sources told Forbes that the possibility of an acquisition had been on Daily Harvest’s radar, but speculated that an IPO was more likely because of the company’s size.

Some Daily Harvest customers have expressed frustration with how the company has handled reports of these illnesses, and say they no longer trust the company.

Earlier this month, a now-deleted Instagram post from the company failed to explicitly warn customers about its recall. Instead, it simply said:  “An important message regarding our French Lentil + Leek Crumbles. Link in bio with details.”

“While we do not comment on pending or potential litigation, as soon as we received reports suggesting a possible link between the French Lentil + Leek Crumbles and an adverse reaction, we immediately took action and launched a voluntary recall,” a Daily Harvest spokesperson wrote over email. “We have reached out multiple times directly to consumers who received the product, instructing them to dispose of it and not eat it.”

As for whether Daily Harvest can salvage their business, Hanson said: “Well, it always helps if you have big pockets as a corporation.”

He pointed out that the Dole Corporation has faced multiple issues with its leafy greens, which have been recalled due to the risk of listeria.

Hanson said a company’s ability to withstand outbreaks like these also depends on how it responds to the crisis, and whether it’s convinced the public it won’t happen again.

“Some companies go out of business. And some manage to convince their customers that they’ve got it under control,” he said.