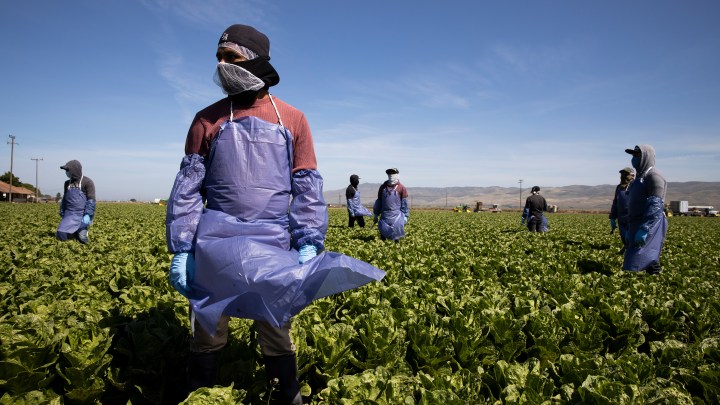 Farming is never easy, and since last year farmers have had it even harder. The trade war with China heated up and tit-for-tat tariffs hurt U.S. agriculture exports. Then came all the chaos of the pandemic, with domestic demand disrupted, restaurants and cafeterias shutting down, and meat and fruit and vegetable processors having COVID-19 outbreaks and shutting down, too.

But as of September, farmers are feeling pretty OK.

Darius Windley has been bringing in the harvest on his small vegetable farm in northeastern Nebraska: “Tomatoes, every kind of pepper you can think of, cabbage, onion.”

The big players here are corn and soybeans.

“These big farmers, at night it’s kinda surreal to look out over the horizon and you can see all the combines and grain trucks are running full-on,” Windley said. “I think they’ve had a pretty good harvest this year.”

A really good harvest, and prices have increased “rather dramatically since late July, particularly for soybeans,” said Michael Langemeier, an ag economist at Purdue University.

He said that’s one reason optimism among farmers is up to the highest level since the pandemic hit, according to Purdue’s latest survey.

Another reason optimism is up is that the USDA’s about to send farmers $14 billion in COVID-19 relief payments, on top of the $16 billion given back in the spring.

“Over 35% of net farm income is estimated to come from government payments this year,” Langemeier said.

“China is importing a lot of chicken, beef and pork,” he said.

Now, farmers have had problems: The derecho windstorm in Iowa hurt grain crops there and California’s wildfires have hurt some wineries, University of California, Davis ag economist Daniel Sumner said.

“[In] the iconic Napa Valley, the smoke taint is a serious loss to grapes that are immensely expensive,” he said.