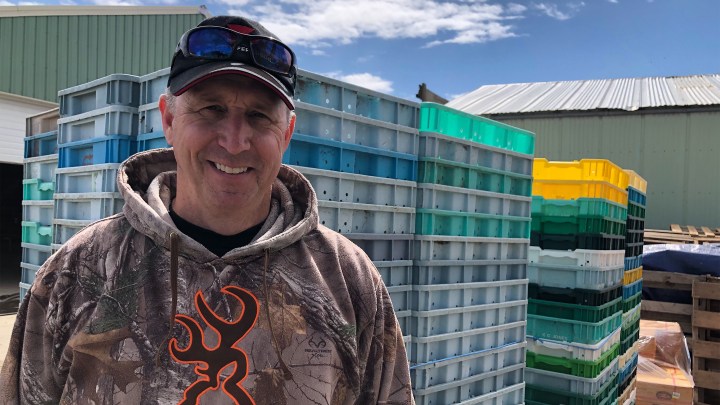 Northwest growers are scrambling to figure out how to work around the COVID-19 pandemic and still bring in the coming harvest of fruits and vegetables. Farm workers are considered essential because they are part of the food supply chain. But how do you keep workers social distanced in a tight packing shed?

North of Pasco, Washington, Jim Middleton’s farm crew is washing
stacks of plastic boxes, called lugs. They rattle as they fall to the concrete, then they’re washed and picked up again. Soon, they’ll be packed with fresh-cut asparagus. The packing shed is a very small space, but workers can keep their distance from one another in the field.

“I don’t think it will be that bad,” Middleton said. “The crews are only one or two people, they are usually family members. We’re not ever congregating into big groups.”

But his asparagus harvest is brief and intense. It goes on every day for 10 weeks. Just one or two virus cases could cripple his operation.

“So, we can’t take a two-week break in case people get sick,” Middleton said.
“Without a regular workforce every single day, we’re going to get backed up
quickly and have a lot of product that we wouldn’t be able to pack or sell — that could get upside down in a big hurry.”

“We’re going to check people for temperatures coming to work,” Clouse said. Anybody that shows a fever won’t be let inside.

“We’ll ask them to go
home and quarantine themselves.”

Still to come are some of the Northwest’s most intensive hand-picked crops: cherries and ​blueberries​. They’ll be ready to harvest starting later this month and in June.