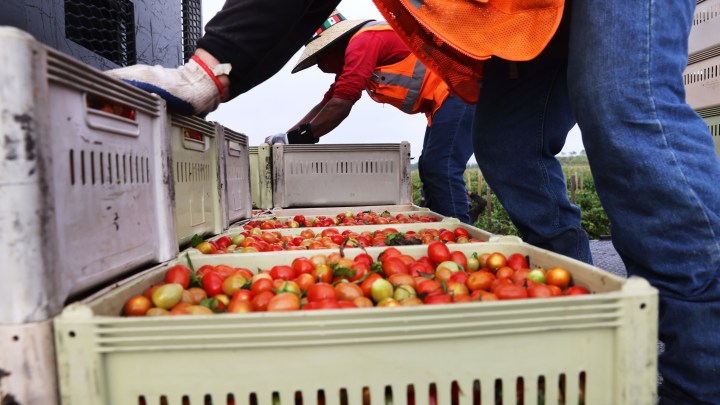 COPY
The pandemic has highlighted the poor living and working conditions some temporary farmworkers in Canada experience. Spencer Plat via Getty Images

The pandemic has highlighted the poor living and working conditions some temporary farmworkers in Canada experience. Spencer Plat via Getty Images
Listen Now

Leamington, Ontario, is known as the tomato capital of Canada. Dotted with greenhouses that grow everything from cucumbers to cannabis plants, Leamington is also home to a concentration of farmworkers in Canada on temporary agricultural visas.

Herby, originally from the Caribbean island of St. Lucia, said that even with the onset of the pandemic, social distancing was next to impossible in the crowded bunkhouse he shared with other workers.

“The next guy to you is about 3 feet away,” he said. Once, one of his colleagues came down with symptoms. “It spread, spread and spread, and I think only one worker didn’t have it when to went to get tested.”

Herby asked us not to use his last name because he will be seeking a new employer to sponsor his next visa. He said he tested positive for COVID-19, but his symptoms were mild. More frightening, he said, was being surrounded by so many people who were ill all at once.

During the first growing season of the pandemic, farmworkers in Ontario, Canada’s most populous province, tested positive for COVID-19 at higher rates than front-line health workers. Those striking numbers and outbreaks on farms — which, in some instances, numbered hundreds of cases — both brought new attention to poor living and working conditions for some temporary farmworkers and raised the prospects of lasting changes.

By last June, Canada’s health minister, Patty Hajdu, was testifying to a parliamentary committee about what she’d been learning of conditions on some farms that she said would “curl your hair.”

“It is a national disgrace the way workers are treated,” Hajdu said.

It was unusual to hear such high-level politicians, including Prime Minister Justin Trudeau, address housing and working conditions for foreign workers that farmworker advocates have criticized for years.

“It just wasn’t really on the radar prior to the pandemic,” said David Fraser, who covers the Canadian capital of Ottawa for the agricultural trade publication The Western Producer. “As we’ve all seen, COVID-19 has highlighted where our food comes from.”

The Ontario Greenhouse Vegetable Growers’ association, which is headquartered in Leamington, declined an interview but has posted a series of “facts and myths” about foreign workers programs on its website. It notes that every farm is “heavily inspected” and housing is inspected “at least annually.”

Last summer, Hajdu, the health minister, alluded to major changes to come for the farmworker visa programs. So far, the government has primarily increased money for inspections and started a process to set standards for housing by 2022.

As incremental steps, “they’re welcomed, but if this is it, then they certainly haven’t gone far enough,” said Janet McLaughlin, a researcher and co-founder of the Migrant Worker Health Project.

While the pandemic has highlighted how vulnerable workers are, she said attention and reforms will need to outlast it.