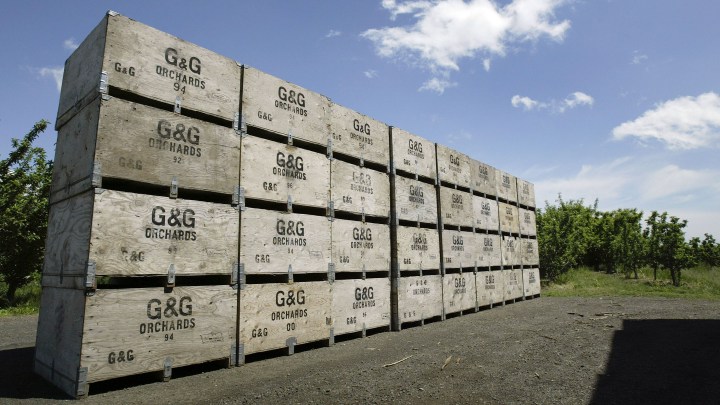 The COVID-19 pandemic has been hard on agriculture and food production. Through the spring and summer, plants that process fruits and vegetables and meats suffered large coronavirus outbreaks, and in many cases had to temporarily shut down.

This pattern has played out in central Washington’s Yakima Valley, where fruit-packing plants were hit with a wave of COVID infection in the summer. Cases spread from the crowded, busy processing plants to family and community members, in an area where many workers earn their livelihood either in the fields and orchards, or in food manufacturing.

In early summer, as COVID spread and Yakima County racked up some of the highest case-counts in Washington State, workers at multiple packing plants went on strike. They demanded PPE (personal protective equipment) for their workplaces, as well as more safety measures in the plants to prevent COVID transmission, along with hazard pay as essential workers.

In late October, the fall harvest was in full swing in the irrigated orchards of this prime apple-growing region, which also produces bumper crops of cherries and pears.

“Cosmic Crisp and a lot of really great varieties are still on until mid-November,” said Mike Gempler, executive director of the Washington Growers League, which supports fruit producers with regulatory compliance and provides housing for farm workers across the region.

Gempler said the summer of 2020 was one of the most difficult the industry has experienced in decades. There were strikes — which lasted for several weeks in some cases — and prolonged shortages of PPE. “Everything having to do with COVID protection was back-ordered,” Gempler said, “the masks you needed, the face shields you needed, the hand-washing stations—you couldn’t get it. So people were fabricating things in their shops.”

Producers also had to re-engineer their packing plants to space workers out more, which often required slowing down the packing lines or investing in new equipment.

Gempler said the plants are running full-tilt now. He estimated that producers’ costs are up 10% to 15% compared to last year. “People just spent the money, if they had it, to stay in business,” he said. “Because if they had an outbreak or if the state came in and inspected and they were full of violations, they’d shut them down.”

The Washington Growers League had to modify the housing it runs for hundreds of mostly Latinx migrant farm workers and foreign guest-workers on H2A visas.

At the League’s housing complex in the small farm-town of Mattawa in apple-orchard country along the Columbia River, each floor typically houses 24 workers. They share bathrooms, showers, laundry and a kitchen — which now has plastic partitions installed between the stoves. Their temperatures are taken and they’re screened for symptoms of illness daily.

“Using bunk beds really didn’t provide adequate separation, so bunk beds were disallowed — which cut our housing capacity in half,” Gempler said. One guest-worker from Mexico was cleaning his assigned kitchen area and not wearing a mask when this reporter visited. The worker said he was concerned about coronavirus and usually wore a mask, but had left his in his bedroom that morning.

Wendy Lopez runs the site, and is also an elected city councilor in Mattawa. She said most residents of the town and the housing complex are wearing masks consistently and keeping socially distant now. But earlier in the pandemic, she said that often wasn’t the case.

“In the beginning it was a little bit hard,” Lopez said. “People didn’t really believe that it was true. But once you see a family member get sick, one of the local priests got sick, that hit pretty hard and that’s when people started getting serious.”

In the wake of the summer strikes and the wave of COVID illness that swept through Yakima’s immigrant community, labor activists are now trying to organize a union in the area’s packing plants.

“Employers are now giving masks,” said immigration attorney Eilish Villa Malone with Yakima-based Trabajadores Unidos por la Justicia/Workers United for Justice. “But they [the workers] are also working shoulder-to-shoulder, the lines are super-tough — meaning that they’re throwing a lot a lot of fruit down the line and it’s constant physical strain.”

And COVID-19 is still a danger to workers and the community. “It’s not really going away,” Villa Malone said. “Maybe it’s gone down percentage-wise, but I’m still seeing people get sick. And a lot of the workers are afraid or unable to take time off when they get sick. Because when you’re a minimum-wage worker, you can’t afford to take time off, maybe you don’t have sick leave, and maybe you can’t get unemployment.”