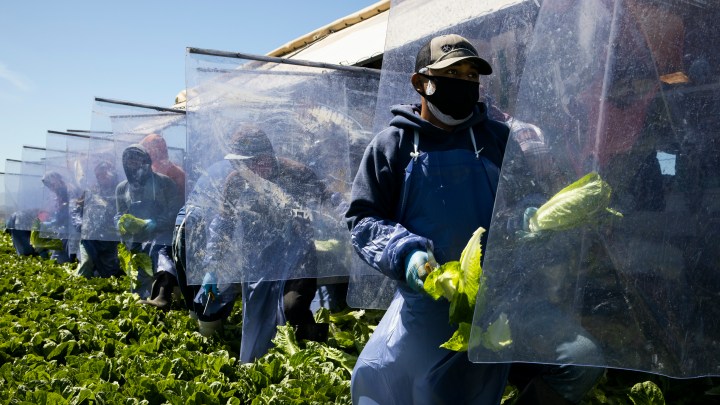 COPY
Research shows the need for public health measures and vaccine distribution to protect essential workers like those on farms. Above, plastic dividers separate workers on a farm in California. Brent Stirton/Getty Images
COVID-19

Research shows the need for public health measures and vaccine distribution to protect essential workers like those on farms. Above, plastic dividers separate workers on a farm in California. Brent Stirton/Getty Images
Listen Now

New research from the University of California, San Francisco, shows which jobs outside of health care became deadlier, and by how much, during the pandemic. Researchers used occupations listed on death certificates to track excess mortality across job sectors in California between March and October 2020.

The analysis shows that food workers in restaurants, food production and agriculture face the greatest threat. Their risk of dying went up by 40% during the period studied. For Latinx workers, deaths increased by 60% in the sector.

“Sadly, it does not surprise me,” said Jason Yarashes, lead attorney at the Legal Aid Justice Center in Virginia. He was instrumental in pushing for workplace safety standards in the state, and he works with a population of largely immigrant farm and poultry workers.

“These are often low-wage, essential jobs,” she said. “The need to work even if one is not feeling well might be there. We know sometimes the job protections are not there.”

Bibbins-Domingo said the research shows the need to target public health measures and vaccine distribution to protect this population.

A Centers for Disease Control and Prevention panel on vaccination recommended in December that essential workers be prioritized after health care workers and nursing home residents.

“That made complete sense on paper, but was too complicated to be implemented by our fragmented, multilayered health system in practice,” said Drew Altman, president and CEO of the Kaiser Family Foundation.

Attempting to narrowly target the limited supply of vaccine according to complex tiers of qualifications has proved a challenge in the United States’ decentralized health care system.

After a slow start, more than half of states have now simplified their priority plans by opening vaccinations to anyone over 65, in some cases bumping essential workers down the line.

Altman said the best outcome would be to accelerate the phases for everyone by upping vaccine supplies, either through increased production or the eventual approval of additional vaccine candidates. 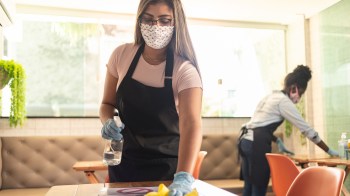