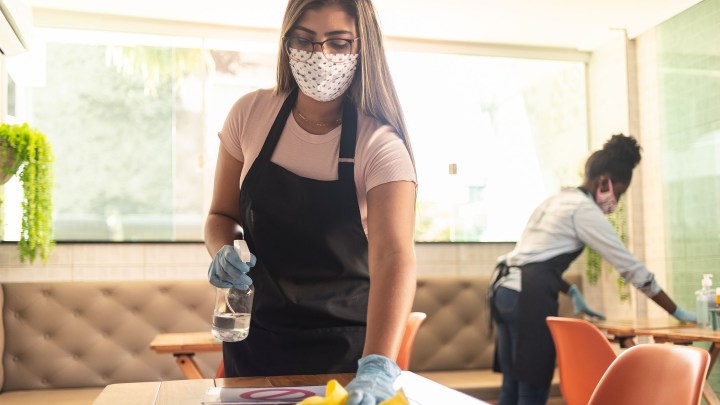 With word Thursday that hospitalizations for COVID-19 have now surpassed 100,000, more than twice as high as the previous peak in the spring, there’s a new report on coronavirus and the workplace.

According to the Urban Institute, Black, Latinx and Native American workers are particularly vulnerable to infection on the job. Many are in industries considered essential, or work in service industries in states with fewer COVID-19 restrictions and cannot do their jobs from home. This report comes as the CDC is in the process of evaluating which groups should get vaccines before others.

More than half of Black, Latinx and Native American workers have jobs that put them at a greater risk of getting sick, said report author Lisa Dubay.

“That, likely, is part of the reason why you have much higher rates of cases for the same populations,” Dubay said.

That compares with about 40% of white workers whose jobs put them at risk. Dubay also found workers in the higher risk groups were more likely to lack health insurance, to depend on public transit and live in multigenerational housing. Those factors increase the risk of disease spread.

Dr. Helene Gayle, one of the co-chairs of a scientific committee providing guidance to the CDC, said all of these factors must be taken into account when deciding how to distribute vaccines.

“Doing it in a way that really does look at who’s at greatest risk, who’s most vulnerable, who’s most likely to develop severe disease,” Gayle said.