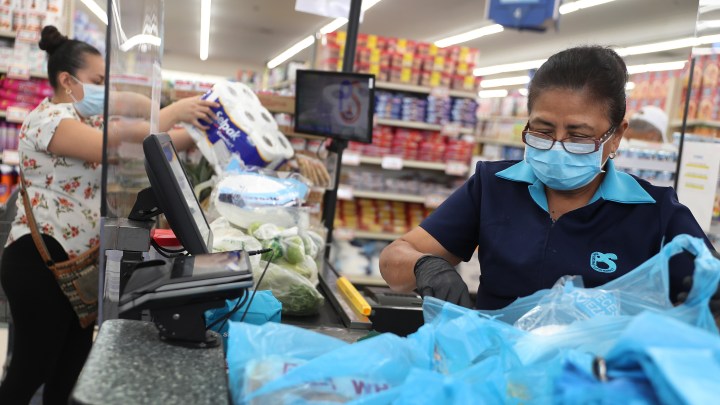 COPY
Cashier Olga Jiminez, clad in mask and gloves, at work at Presidente Supermarket in Miami in April. Many companies that provided hazard pay early in the pandemic eventually phased it out. Joe Raedle/Getty Images
Workplace Culture

Cashier Olga Jiminez, clad in mask and gloves, at work at Presidente Supermarket in Miami in April. Many companies that provided hazard pay early in the pandemic eventually phased it out. Joe Raedle/Getty Images
Listen Now

Susan Hernandez has been away from her job at a Food 4 Less grocery store in North Hollywood, California, for almost two months. In mid-November, she came down with COVID-19 and is still recovering.

“My scariest moments were at night when I couldn’t breathe,” she said. “It felt like there were sharp, icicle pains being shot into my lungs, and I just didn’t know if I was going to make it.”

She lives with her husband and two older children, who also fell ill. She’s convinced she contracted the virus at work, where she said a customer without a mask had yelled in her face just days before.

In the early months of the pandemic, that gamble was rewarded with a $2 per hour hazard-pay raise. Kroger, which owns Food 4 Less, discontinued extra pay in June, saying it’s committed to gradual and permanent pay raises. Hernandez, with her union, has been pushing to reinstate hazard pay.

With COVID-19 spreading out of control in many parts of the country, it’s never been riskier for essential, front-line workers to do their jobs. Yet many companies are no longer offering hazard pay. Local governments in Los Angeles County, the current epicenter of the pandemic, are the latest to move toward mandating that essential workers receive a pay bump.

L.A. has seen workplace spread of COVID-19 explode as the county has been hit with a tsunami of cases. Hundreds of employees at more than two dozen local retailers have been infected, despite some of the strictest public health measures in the country.

Angelica Hernandez works at an L.A. McDonald’s. She said workers there should get hazard pay because the jobs carry unavoidable risk, even with all the safety measures in place.

“We don’t have the space that we need to keep 6 feet” apart, she said. “Sometimes there are five or six of us in the kitchen, and we’re superclose.”

She said multiple colleagues have gotten sick, with one ending up on a ventilator. So she sent her children to stay with grandparents to avoid exposing them to the virus.

“There’s just anguishing choices that these workers have between their health, their family’s health and a paycheck,” said Molly Kinder, David M. Rubenstein fellow at the Brookings Institution.

She said about half of front-line workers are nonwhite and earn low wages. While many large companies have offered hazard-pay increases, the amounts and duration have been uneven.

“Some companies have been extremely generous and others have not,” she said.

Her research found Best Buy, Target and Costco had increased wages the most while Kroger, Walmart and Amazon had paid among the smallest bonuses, despite those companies earning billions of dollars in additional revenue during the pandemic.