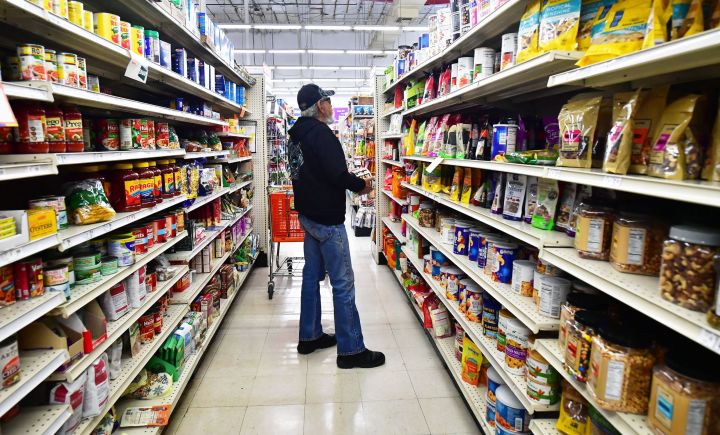 COPY
The price of everything — from groceries and gasoline to discretionary purchases like travel — is going up. As a result, consumers aren't spending as freely. Frederic J. Brown/AFP via Getty Images

The price of everything — from groceries and gasoline to discretionary purchases like travel — is going up. As a result, consumers aren't spending as freely. Frederic J. Brown/AFP via Getty Images
Listen Now

Along with an update on inflation, the federal Bureau of Economic Analysis on Thursday offered a fresh picture of the two-thirds or so of the economy that is consumer spending.

​It ran really hot in 2021 and early this year, but it’s tapering off: Spending rose just two-tenths of a percentage point in May, after climbing six-tenths in April.

Personal incomes were up, but still not enough to keep up with rising prices.

​It’s because of those rising prices, along with the rising cost of borrowing — thanks to the Federal Reserve’s interest rate increases — that consumers are pulling back.

That slowdown doesn’t mean a drastic drop in consumer spending. Demand is strong enough to support retailers that are still trying to staff up, a lot of consumers still have savings built up from pandemic relief checks and people feel pretty confident they’re going to keep their jobs.

“We also ask about people’s current financial conditions, and those numbers have just been getting worse and worse and worse,” said Chris Jackson at polling firm Ipsos. “And right now they’re as bad as we’ve seen them — really — ever.”

The cost of everything going up is to blame, Jackson said. Basics like food and gasoline, rent and medical bills, and anything discretionary — like going out or taking a vacation — are all seeing increases.

“People feeling like they can’t afford stuff, and people being scared that maybe they won’t be able to afford stuff in the future,” Jackson said.

People are starting to act on those feelings and fears, said John Leer at Morning Consult, by holding off on big purchases.

“Given all the economic uncertainty that’s out there right now, consumers are increasingly saying they’re no longer planning on buying a car or buying a house,” Leer said.

That’s for higher-income consumers who could, maybe, stretch a little and afford them.

“Use whatever modest savings you have to make ends meet, or do you take on additional credit to make those purchases? We’re seeing a little bit of both,” he said.

“And it all speaks to a lack of confidence in the future,” he said.