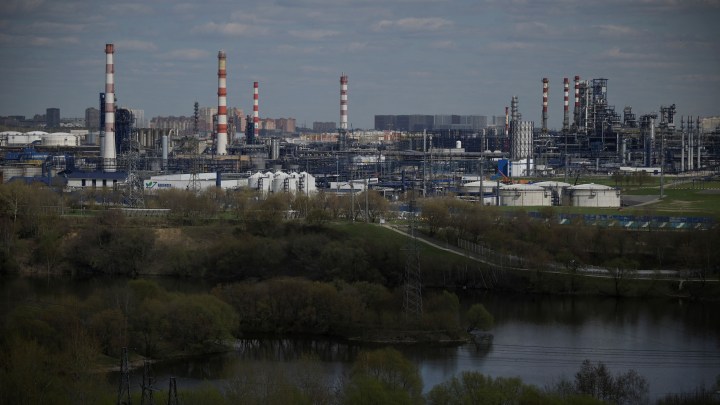 COPY
An oil refinery on the outskirts of Moscow. Although the advanced nations are considering a price cap on Russian oil, Russia could retaliate by shutting off the flow of natural gas to Europe. Natalia Kolesnikova/AFP via Getty Images

An oil refinery on the outskirts of Moscow. Although the advanced nations are considering a price cap on Russian oil, Russia could retaliate by shutting off the flow of natural gas to Europe. Natalia Kolesnikova/AFP via Getty Images
Listen Now

The G-7, which includes Canada, France, Germany, Italy, Japan, the United Kingdom and the United States, wrapped up a three-day summit in the German Alps on Tuesday.

Top of mind for the presidents and finance ministers in attendance: how to support Ukraine while still allowing the world to buy Russian oil and natural gas.

President Joe Biden thinks he has a solution, which is to cap prices on Russian oil. In its official post-summit communique, the G-7 said its members would “evaluate the feasibility and efficiency” of that idea.

What we’re talking about here is kind of a bizarro version of OPEC. Instead of a cartel of oil sellers that gang up to keep profits high, there would be a cartel of oil buyers that gang up to tell Russian leader Vladimir Putin: “We’ll buy your oil, but only at this price,” said Mark Finley, who researches energy markets at Rice University. “And because there’s enough of us, we have market power. You have no choice but to go along with it.”

Russian oil is selling at around $80 a barreI. But what if the G-7 and European Union said they’re only willing to pay $40 a barrel — take it or leave it? “Asserting that price cap would then give Russia’s other customers, like China and India, the leverage to say, ‘Well, if that’s what they’re paying, that’s all we’re gonna pay you,'” Finley said.

But China and India aren’t keen to punish Putin and are already getting discounts on the tons of Russian oil they’re buying. Ellen Wald at Transversal Consulting says risking Russia’s wrath is probably not worth it — India is extremely reliant on imported oil, and China has massive energy needs.

The U.S could announce sanctions on anyone anywhere who pays more than the cap, but Charles Lichfield at the Atlantic Council said that would be geopolitically costly and difficult to enforce.

It would also be a mistake to underestimate Russia’s capacity to retaliate, maybe by completely shutting off natural gas to Europe as winter nears.

“Russia can flex its muscles because it’s taken in so much money already this year,” Lichfield said, adding that Russia has already received more revenue from oil and gas than it expected for all of 2022.

Clarification (June 30, 2022): A previous version of this story included a statement that characterized India as producing “zero oil” of its own. While India imports the vast majority of its crude oil (as much as 85%), it does produce a small share of its own.