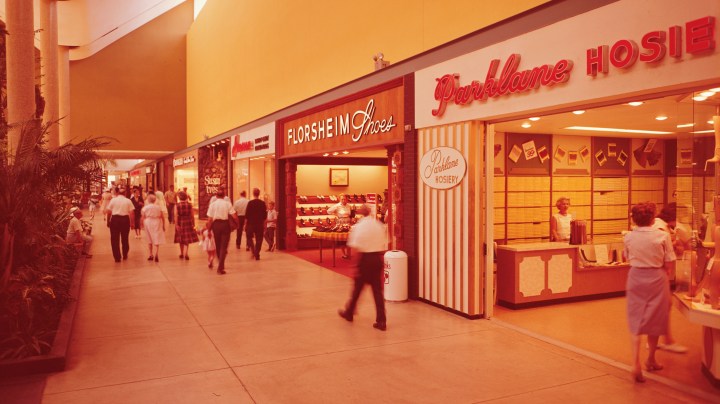 COPY
Older malls that are dead or dying may offer communities and cities the chance to rethink the use of public space. H. Armstrong Roberts/Retrofile via Getty Images
Shelf Life

Older malls that are dead or dying may offer communities and cities the chance to rethink the use of public space. H. Armstrong Roberts/Retrofile via Getty Images
Listen Now

Malls are dead. At least, that was the consensus at the height of the pandemic. The shopping mall was already on shaky ground before the pandemic. A 2017 report from Credit Suisse predicted that, by 2022, between 20% and 25% percent of all U.S. malls would close. The pandemic increased the already immense pressure from online stores. In 2020, non-store retailers saw a 30% increase in sales from the year before. After the pandemic hit, the future of the shopping mall seemed grim.

But don’t write the eulogy just yet. Alexandra Lange, a design critic and writer, believes that malls have gotten a “bad wrap,” specifically from the architecture and design community. In her new book, “Meet Me by the Fountain: An Inside History of the Mall,” Lange details the history of the American shopping mall and how its beginnings shaped American culture, society and design. She believes that design played a major role in the shopping mall’s successes and failures.

“Once you consider something dead, in our minds, it goes away,” Lange told Marketplace’s Amy Scott. “I want people to see malls as a place where we can do a lot of new and creative things.”

The following is an excerpt from her book.

The American dream — bootstraps, frontier, white picket fence — crossed paths with malls when they emerged in the decades after World War II, as the United States reinvented itself. In 1954, for the first time in American history, the number of children born crossed the four million mark, a level that would be sustained for each of the next ten years. The GI Bill of 1944 and federal highway acts approved in 1944 and 1956 subsidized the growth of the new residential suburbs to house these booming families, and the roads to reach them: more than a million new homes built per year, and more than forty-two thousand miles of highway. What most initial postwar development failed to incorporate, however, was the type of central — and centering — space that had been part of human civilization since its earliest origins. In subsidizing the home and the road, the government failed to subsidize a place to gather. Something essential to human nature had been missed: People love to be in public with other people. That momentary joy I felt seeing happy families is the core of the mall’s strength, and the essence of its ongoing utility. In postwar suburban America, the mall was the only structure designed to fill that need. People and money and controversy and larger and larger structures followed. So, in its turn, did the culture. The late twentieth-century United States doesn’t make sense without the mall.

I knew going into this project that I, born in 1973, was part of the Mall Generation, raised on the smell of those pretzels, able to tune out the Muzak and find my car in a multi-level parking garage. As a design critic, as a child of the 1980s, and as a person devoted to the idea that architecture should serve everyone, the mall was my ideal subject. Like design for children, the subject of my last book, the mall was ubiquitous and under-examined and potentially a little bit embarrassing as the object of serious study. Shopping, like children, was a topic for after hours; and malls, like playgrounds, were places dominated by women and children. Go on Etsy and you’ll find numerous unironic bumper stickers that read A Woman’s Place is in the Mall. What I didn’t realize was that I had been on the ground for the inception of urban inventions like the festival marketplace at Boston’s Faneuil Hall, and that, even in my current Brooklyn neighborhood, I was shopping on a pedestrian street that was one of the city’s responses to the flight of white dollars to the suburbs. Once I started looking at shopping not as a distraction but as a shaper of cities, I saw its traces everywhere. While architecture history tended to focus on suburban houses, and planning history looked to the highways, the shopping mall fell into the cracks between the personal and the professional, as if we as a culture didn’t want to acknowledge that we needed a wardrobe, furniture, and tools for both.

From “Meet Me by the Fountain: An Inside History of the Mall” by Alexandra Lange. Copyright © Alexandra Lange, 2022. Published by Bloomsbury Publishing Inc.