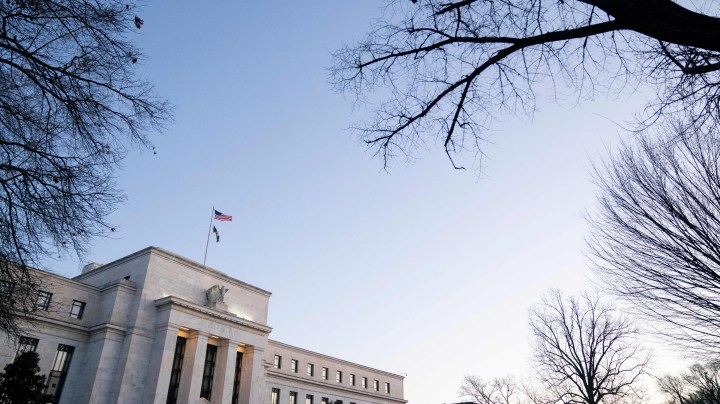 COPY
The Fed started letting some of its mortgage bonds expire in 2017. But then the pandemic hit, and the economy needed help again. Stefani Reynolds/AFP via Getty Images

The Fed started letting some of its mortgage bonds expire in 2017. But then the pandemic hit, and the economy needed help again. Stefani Reynolds/AFP via Getty Images
Listen Now

We’ve been reporting on the details of the Federal Reserve’s interest-rate hikes and their effects. Now, the Fed is embarking on another move that could have big effects on the economy, and it has to do with the central bank’s balance sheet.

To stimulate the economy over the past few years, the Fed bought a lot of debt securities and held them on its balance sheet. Bills, notes and bonds issued by the Treasury make up the majority of those items. But mortgage-related securities make up about a third of the Fed’s balance sheet.

This week, the central bank will start getting those items off its balance sheet. But that begs a couple of questions: Why the does the Fed own mortgage-backed securities in the first place? And what does it hope to achieve by getting rid of them?

The reason the Federal Reserve owns mortgage-backed securities goes back to the golden days of the financial crisis of 2008 and 2009, when the Fed was trying to prevent the mortgage market from collapsing.

“During the crisis, every financial institution in the world had some exposure to the U.S. housing system,” said Jim Vogel at FHN Financial.

Those institutions had no interest in buying more housing bonds in that environment, Vogel said. “And without that supply of capital, the Fed stepped in as a buyer, in effect, of last resort.”

The Fed ended up buying over $1 trillion worth of mortgage bonds — in the process, pumping that much money into the economy — and kept buying them for several years, according to Winnie Cisar at CreditSights.

“In the, call it 2009 to 2014 period, for the most part, the Fed was still adding holdings to its balance sheet, both Treasuries and mortgage-backed securities,” she said.

In 2017, the Fed started letting some of its mortgage bonds expire. But then, in 2020, the pandemic happened, so the Fed went back to buying mortgage bonds.

The goal, Cisar said, was once again to put cash into the economy. “Make sure that borrowers were able to borrow, that property valuations were still going to be relatively stable, to avoid a Great Financial Crisis 2.0.”

Now, the Fed’s back to letting its existing mortgage bonds expire, so it gradually owns fewer and fewer of them. And if the Fed isn’t buying more mortgage bonds?

“Then you’re going to need a private-sector actor to step in if you want to maintain all these mortgages out there,” said Megan Greene, chief economist at the Kroll Institute.

When private investors buy those mortgage bonds, that pulls cash out of the overall economy.

“Then there’s less capital generally sloshing around in the system, [and] that should slow down demand,” Greene said.

And that, in theory, should take some of the upward pressure off inflation.