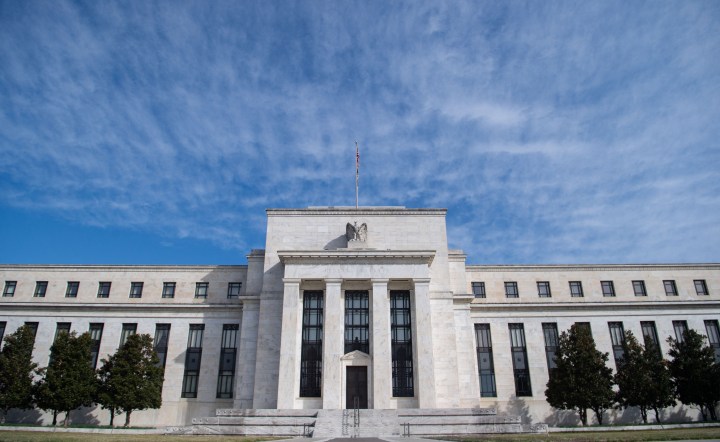 COPY
As the Fed has scooped up assets to carry out quantitative easing, some are asking: At what cost? Above, the Federal Reserve building in Washington, D.C. Saul Loeb/AFP via Getty Images

As the Fed has scooped up assets to carry out quantitative easing, some are asking: At what cost? Above, the Federal Reserve building in Washington, D.C. Saul Loeb/AFP via Getty Images
Listen Now

Mary Daly’s office looks out over the San Francisco Bay. The scenery helped the president of the Federal Reserve Bank of San Francisco come up with her analogy of choice to explain the Fed’s balance sheet: a tanker ship.

“It is big. It turns, but not with grace. It’s not very nimble,” Daly said during an interview last week. “You have to know where you’re heading and what you’re doing. But it ultimately gets you to the point of destination.”

Right now, that destination is to tame inflation. One way Fed officials have tried to do that is by raising its key interest rate, the federal funds rate, which Daly said moves less like a tanker and more like a speedboat.

During the financial crisis of 2008, policymakers cut that rate to zero to increase the availability of credit. With so little wiggle room to fix credit markets and help the economy recover, they turned to a less conventional tool for the first time: the balance sheet. And Daly said it’s worked well.

“I think it’s an essential part of our toolkit, because, ultimately, we have to deliver on the support the economy needs,” Daly said.

The balance sheet, which shows the central bank’s portfolio — including treasury debt and mortgage-backed securities — totals nearly $9 trillion. Last month, the Fed started allowing those holdings to run off its balance sheet by refraining from reinvesting proceeds of maturing securities.

But using both tools — the federal funds rate and the balance sheet — to adjust monetary policy can be tricky.

“How do we get nimbly somewhere when we’ve got a speedboat and a tanker ship, and we have to move them more or less at the same time?” Daly said.

The Fed doesn’t want to surprise markets. Late last year, policymakers flagged their plans to start shrinking the balance sheet before they started hiking rates. Daly said the first interest rate hike in March might have come sooner if the balance sheet hadn’t been a factor.

There’s a lot we don’t know about how the balance sheet works, said Harvey Rosenblum, a former director of research at the Federal Reserve Bank of Dallas who now teaches at Southern Methodist University. Rosenblum has his own balance sheet analogy:

Yet Fed officials have triggered four waves of asset purchases that have expanded its balance sheet — a process known as quantitative easing. Three of those waves took place between 2008 and 2014. The fourth came in response to the pandemic.

Rosenblum said that, originally, quantitative easing was supposed to be a temporary fix. But like many drugs, it’s less effective the more you use it, he said.

As the Fed has scooped up assets to carry out this policy, some are asking: At what cost? Former Fed economist Andrew Levin, who’s now a professor at Dartmouth College, said that the Fed now owns more than 40% of all residential mortgage-backed securities.

“It’s got a very big footprint in that market. All the market participants know that. The pension funds, life insurance companies,” Levin said.

Levin worries the purchasing spree has created the potential for distortions in that market and others. He’s among those who are now analyzing the costs and benefits of the Fed’s balance sheet program. There’s much to learn about the balance sheet’s effects on the economy, said Megan Greene, global chief economist at the Kroll Institute and a senior fellow at Brown University.

“It’s not clear that it’s the Fed actually buying any of this stuff that moves markets,” Greene said. “It could just be their announcement of an intention to [buy assets] which moves markets.”

The central bank has only tried to shrink the balance sheet once before, between 2017 and 2019. It had to stop after short-term borrowing costs spiked. That’s the kind of volatility policymakers at the Fed want to avoid this time around.