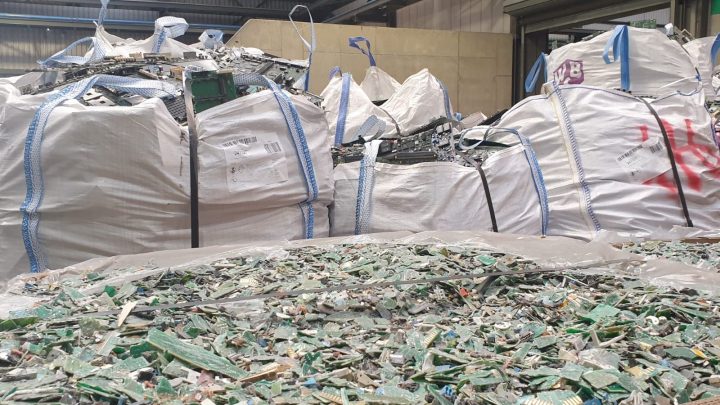 COPY
Circuit boards and other electronic waste is collected at the Umicore plant in Antwerp, Belgium. Much of the material has value through recycling for new devices and products. Ivana Davidovic/BBC News

Circuit boards and other electronic waste is collected at the Umicore plant in Antwerp, Belgium. Much of the material has value through recycling for new devices and products. Ivana Davidovic/BBC News
Listen Now

The volumes of electronic waste in the world are staggering, amounting to many millions of tons. So what do you do with your old laptop or cellphone when you’re done with it? Do you put it in a box in the attic, in the trash, or maybe consider recycling?

There’s still value in the hardware if you know where to look, and crucially, how to get it out. That’s where “urban mining” — extracting wealth through recycling from electronic waste — comes in.

Thierry Van Kerckhoven is head of supply recyclables at Umicore in Antwerp, Belgium. This once-traditional smelting company has become an urban mining pioneer, specializing in precious metals. It sources electronic waste all over the world. He reveals enormous bags and boxes of e-waste cut up into little pieces.

“So, what we are doing here is that we are shredding the circuit boards to 12 centimeters particle size,” Van Kerckhoven explained.

“At the latest stage, we are doing a further size reduction to 4 centimeters. And then in a fully automated way, we will take a sample,” he said.

Working through an average ton of circuit board material yields promising results, “something like 6 to 800 grams of silver, between 1 and 150 grams of gold, and you may have somewhere around 30 to 40 or 50 grams of palladium.”

They also extract valuable, scarce metals like rhodium as well as palladium, both of which are important in car manufacturing, Van Kerckhoven explained.

“Rhodium is a very valuable metal. It’s also a very scarce metal. About 80%, if not more, is used in one application, the production of new car [catalytic converters]. If you look at palladium, the share of the car industry is dominant.”

Urban mining isn’t just about processing e-waste. It’s also about exploiting the potential of the built environment as a source of raw materials. On the other side of the world, in Sydney, professor and inventor Veena Sahajwalla is well-known in the media there as the Waste Queen. It’s a title she doesn’t mind one bit, seeing herself as part-scientist, part-engineer.

“I have no idea how it happened, but I have to say, Waste Queen sounds pretty awesome,” she said.

Professor Sahajwalla is probably best known for her “green steel” — a more environmentally friendly approach to making the material in which hydrogen is extracted from discarded rubber tires to replace coal in production.

Her approach to making steel uses polymer injection technology. Instead of using coal or coke, they inject waste rubber into furnaces, significantly reducing the carbon dioxide emitted in the steelmaking process. Typically, steelmaking generates around 8% of global carbon emissions.

Sahajwalla’s “green steel” breakthrough has been patented around the world, and it’s also diverted millions of old tires from landfills. Sahajwalla describes it as a “win-win outcome.”

In Europe, the need for firms to decarbonize is also being driven by European Union regulation. Jessika Richter of Sweden’s Lund University researches the resource-conserving concept of the circular economy, particularly involving electronic waste. She said proposals regarding the volume of recycled material required in electric vehicle batteries will quicken the need to source raw materials outside conventional mining.

Future-proofing the urban mining industry will require innovation. Richter explained that while geology doesn’t change, the kinds of batteries used and how they are manufactured are evolving.

“This [is] another challenge to keep up with what will the future battery chemistry be. Should we plan for something else when we’re looking at what recycling processes to be investing in?”

Although urban mining can contribute to long-term environmental protection and resource conservation, as well as provide economic benefits, it is also fraught with challenges. Businesses and homes across the globe generate large volumes of e-waste. What enables urban mining is well-sorted waste streams and persuading people to part with their used electronics.

“In the European Union on average, only 55% of e-waste that arises every year is reported as officially collected; 45% we have no idea what’s going on. It’s the waste flow that disappears, that is illegally shipped to Africa, that is not properly treated to standards, that is not responsibly recycled,” he said.

When you next change your laptop or desktop computer, Leroy would like you to consider what’s in it and that it could be a valuable source of palladium. Russia currently supplies 40% of the world market for the element, which has been substantially disrupted due to sanctions and other measures taken against Moscow since its troops invaded Ukraine.

Europe is heavily reliant on countries like Russia and China as sources of raw materials. “China, for example, is sitting on 98% of the rare earth elements. These are critical raw materials that you need for many electronics in the value chain,” Leroy said.

For countries in Europe, Leroy said, the alternative is to switch away from dependence on Russia and China for critical raw materials. That goal would considerably boost the business case for recycling e-waste through urban mining, especially since even before the war in Ukraine, global supply chains had been severely disrupted due to COVID-19.