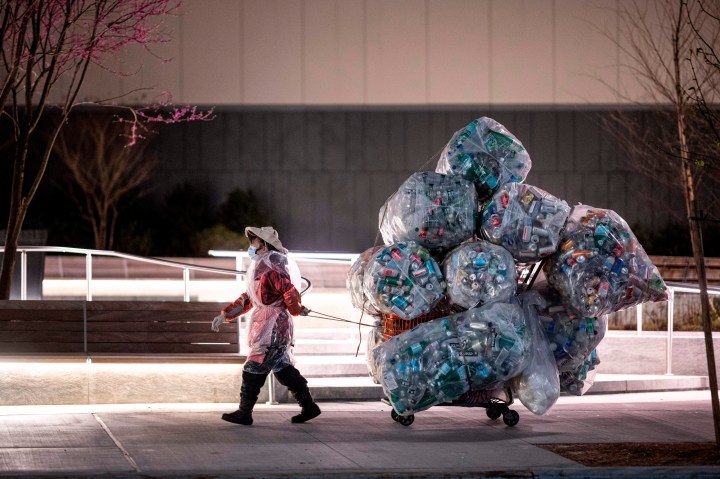 A woman wearing a face mask and a plastic bag pulls a cart loaded with bags of recyclables through the streets of lower Manhattan during the COVID-19 pandemic. JOHANNES EISELE/AFP via Getty Images
I've Always Wondered ...

A woman wearing a face mask and a plastic bag pulls a cart loaded with bags of recyclables through the streets of lower Manhattan during the COVID-19 pandemic. JOHANNES EISELE/AFP via Getty Images

What materials used in the average home are worth recycling?

With consumers increasingly conscious of their environmental footprint, many have looked to recycling as a way to do their part in curbing waste.

There are several main materials that people should be putting in their recycling bin, including cardboard, paper, metal, glass and plastics (although plastics can be particularly tricky), according to Molly Kjellesvig, a recycling specialist for Blue Earth County in Minnesota.

Plastics are assigned a number between one and seven that correspond to a different type of plastic, such as high-density polyethylene (No. 2). The type you should recycle depends on the region you live in. Kjellesvig said that Minnesota, for example, is pushing residents to recycle 1s, 2s and 5s.

“No. 4s also can be recycled at a lot of places. It’s just the marketability of whether or not it’s really worth it to recycle it,” she said. “It’s really important that people just check with their local municipalities to see what they accept.”

Film plastics (produce bags and sandwich bags, for instance) are usually 7s and can be recycled with a little more work. Kjellesvig explained that they can’t be dropped in your curbside bin or at a recycling center, and instead have to be brought to specific drop-offs.

One phenomenon that experts say they’ve observed is “wish-cycling,” when consumers place items in a recycling bin with the hope that it’s recyclable. They can become contaminants, making the recycling process difficult and causing some recyclables to end up in landfills.

Kjellesvig said a major source of contaminants in the country are the plastic bags that recyclables are placed in.

“It’s just really important to make sure that people are understanding what really is and isn’t recyclable,” Kjellesvig said.

Callie Babbitt, an associate professor at the Rochester Institute of Technology, said people often put plastic clam shells (used to package items like blueberries and strawberries) in the recycling bin. But those aren’t recyclable where she lives.

“You don’t want to do that, because then it becomes a contaminant that someone is going to have to actually reach in and pick out of the recycling system as it goes through the facility where it’s processed,” Babbitt said.

Beyond these items, Babbitt said that consumer electronics contain a lot of scarce and valuable materials.

She noted that pretty much anything with a battery or a plug —  think TVs, computers, printers, smartphones, tablets and smart devices — can and should be recycled.

However, she said what’s challenging about these products is you can’t just put them in the blue bin outside your door — they either have to be picked up or taken to a place that collects those materials.

The No. 1 resource Babbitt recommends is Earth911, which tells you which entities in your area will accept a product.

She added that most Best Buys will accept your old electronics, while Dell and Goodwill have a recycling partnership that enables consumers to drop off items at some Goodwill sites.

“What I think is a little bit confusing for consumers is that there’s not a single law or policy about electronics recycling across the whole United States,” she noted. “Here, where we live in New York, it’s actually illegal to throw electronics into your trash.”

“That’s the name of the game — it’s that circle we’re trying to close,” she said.

“When you’re trying to recycle by composting, you have to have both carbon, which might be the paper towels, and nitrogen, which would be the food,” Bonhotal said.

Babbitt said one challenge many people might face when composting is they don’t have the space, or they rent an apartment and can’t build a composter.

“So one strategy we suggest is to look and see if in your local area there’s actually a service that will pick your compost up,” she said.

Is it worth it to recycle in the first place?

While recycling is often promoted as a way for individuals to do their part, is it really effective? A 2017 study found that only 9% of all plastic generated between 1950 and 2015 was recycled.

“To the extent that recycling makes us feel less guilty about our consumption, it actually encourages us to buy more things, which makes things worse overall,” said Trevor Zink, an associate professor of management and sustainability at Loyola Marymount University.

Babbitt said if a material is accepted in your area, you should participate in that system. And Kerry Sandford, who leads the recycling and recovery node at the REMADE Institute, said you can ask your community to add materials to their programs so they can be recycled.

But at the end of the day, many experts agree that the best thing we can do to reduce waste is consume less.

“It would be really great if we can avoid the need to recycle at the start,” Babbitt said. “It will not save us and it will not ruin us. It’s just one of many strategies that we can and should be doing.”