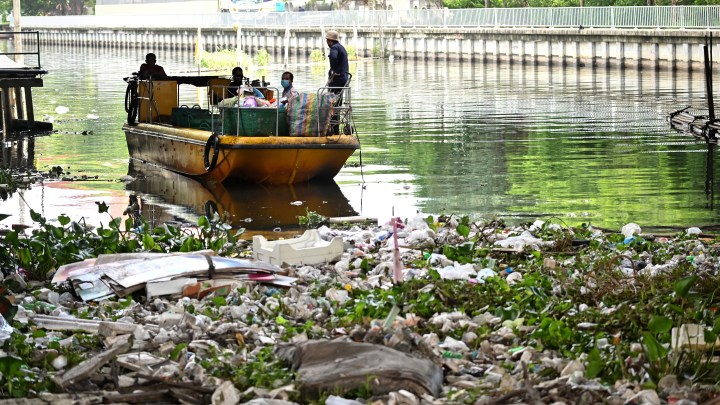 American and British scientists may have found a new weapon in the war on plastic pollution. It’s a so-called “super-enzyme” that derives from a plastic-eating bug, a bacterium that feeds specifically on the plastic used to make bottles, clothing and carpets. The scientists say the super-enzyme could make recycling plastic much cheaper and more lucrative and could deter people from dumping many more tons of the stuff into the environment.

A great deal has been dumped already.

“The world has produced 9 billion tons of plastic over the past 60 years,” said Sian Sutherland, co-founder of an anti-plastic campaign group A Plastic Planet. “Only 7% has been recycled, 12% has been incinerated. So that gives you an idea of the scale of the problem of how much plastic is languishing in our environment right now,” she said.

But the war on plastic waste could get a boost thanks to a breakthrough in recycling at the Centre for Enzyme Innovation at Portsmouth University on the south coast of England. The center studies how enzymes — biochemical catalysts — can be harnessed to help tackle environmental and other problems.

“Traditional recycling involves grounding, shredding and melting the plastic and turning it into an inferior material,” said Rosie Graham, a member of the research team at Portsmouth. “And chemical recycling is very energy-intensive. So we’re looking at a way of using enzymes to break down the plastic naturally using much less energy and producing more valuable materials.”

The Portsmouth research builds on an extraordinary discovery in a Japanese recycling dump in 2016, as the team’s leader John McGeehan told the BBC in a recent interview.

“The Japanese actually discovered a bacterium living in the plastic waste and it was living on a diet of PET plastic. That’s the plastic that makes up our drinks bottle, much of our synthetic clothes and carpets and that type of thing,” McGeehan said.

Plastic dumped in the sea or in the soil can take hundreds of years to degrade naturally. The plastic-munching bugs, Ideonella sakaiensis, deal with it in a matter of weeks. That’s very fast, but of course, not fast enough for Homo sapiens.

“If we want to convert this to an industrial process we need to use our best minds to speed things up,” McGeehan said.

And that  is what they’ve done, in collaboration with Gregg Beckham and his team at the National Renewable Energy Lab in Colorado. Using genetically engineered enzymes from the bacteria, they sped up the process six-fold, breaking the plastic down within days.

“This is really exciting” said Beckham. “This is when you start thinking about scale — up and the use of these bio — technological solutions for PET recycling for bottles, clothing and carpets.”

Potentially this is cheaper and more efficient than either traditional or chemical recycling. By using enzymes to break the plastic down to its most basic molecular building blocks, the scientists have raised the possibility that it can be turned into new materials of a higher value.

“That could incentivize the economics of recycling,” Beckham said. “That is certainly something that we as human kind need to be working on quite vigorously.”

Sian Sutherland of A Plastic Planet salutes innovation and the effort to harness Mother Nature in dealing with one of the world’s foremost environmental problems, but she would prefer to wean the world away from plastics altogether. Sutherland has reservations about the plastic-eating bug approach.

But the Portsmouth researchers and their American colleagues say that  given the magnitude of the problem of plastic pollution many different solutions must be tried. And all of them will take time. It could be a decade before the super-enzyme is commercially viable.