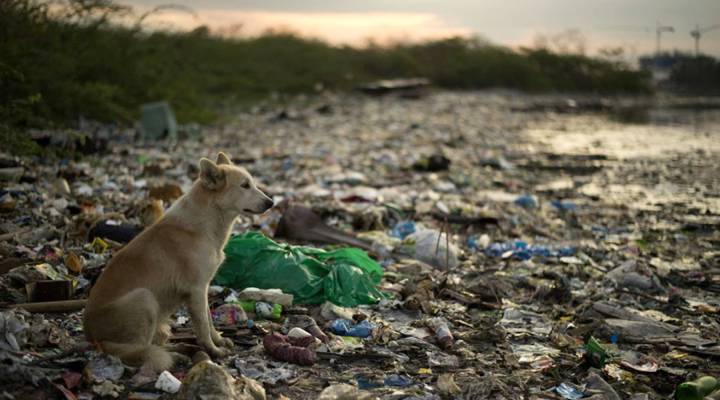 This photo taken on May 12, 2018 shows a dog on a garbage-filled creek in Manila. NOEL CELIS/AFP/Getty Images

This photo taken on May 12, 2018 shows a dog on a garbage-filled creek in Manila. NOEL CELIS/AFP/Getty Images

How much plastic did you use today?

Since the 1950s, more than 9.1 billion tons of plastic has been produced. In 2015 alone, production came to roughly 448 million tons. In an effort to curb plastic use, some states are tackling the issue by banning or limiting certain plastic products, including single-use plastic items.

These include plastic bags from your local grocer, plastic straws in your beverage of choice, plastic utensils from a takeout order and even traditional plastic water bottles.

In honor of Earth Day 2019, let’s do the numbers on plastic.

The global recycling system is estimated to be a $200 billion industry. About 90.5% of plastic has never been recycled, according to a U.N. report released last year. In the state of California, about $25 million is spent each year to dispose of plastic waste in landfills.

Single-use plastic items aren’t helping the economy. After its initial use, the World Economic Forum estimates that “95% of plastic packaging material value, or $80-120 billion annually, is lost to the economy.”

In 2014, the Earth Policy Institute said that one trillion single-use bags were used every year — about 2 million each minute.

California was first state in the U.S. to ban the distribution of single-use plastic bags statewide. Last month, New York became the second to do so. The law is expected to go into effect March 2020.

However, not all plastic bags are created (or regulated) equally. Reusable plastic bags are available for purchase at many retailers in California. Prices are set at the discretion of retailers — but by law they must be sold for at least 10 cents a bag.

What about those cotton tote bags retailers like to sell as an alternatives to plastic? An organic cotton bag needs to be reused 20,000 times to have the same impact on the environment as a single-use plastic bag.

Effective April 22, the city of Los Angeles restricted the use of disposable plastic drinking straws, making them available only upon request. San Diego and Washington D.C. have both done the same thing, as have companies like Disney and American Airlines.

This creates a market for reusable straws. The straw market is reportedly worth $924 million. Online retailer Etsy experienced a 198% surge in searches for metal straws in the first six months of 2018.

A luxury straw market also exists. Between Tiffany & Co.’s $250 sterling silver straw, a rose quartz-embellished straw for $68, and even bent glass straws for $8 each, the market is laden with options.

A market intelligence company estimates it is worth more than $8 billion.

According to a 2015 study, about eight million metric tons of plastic waste ended up in the ocean in 2010. By 2050, it’s estimated that, by weight, the ocean will contain more plastic than fish, according to a 2016 study by the Ellen MacArthur Foundation.

Some of that waste winds up in the Great Pacific Garbage Patch, a mass of waste in the ocean between Hawaii and California. The vortex is sometimes said to be larger than Texas (which is about 270,000 square miles in size).

But not all plastic in the ocean is visible to the human eye. Microplastics, pieces of plastics less than five millimeters in length, are the most common form of “marine debris” found in oceans and lakes across the world. According to the United Nations, at least 51 trillion microplastic particles are found in the ocean, “500 times more than stars in our galaxy.”

Correction (April 22, 2019): A previous version of this story mischaracterized a Los Angeles city rule regarding drinking straws. Straws are available on request. The text has been corrected.