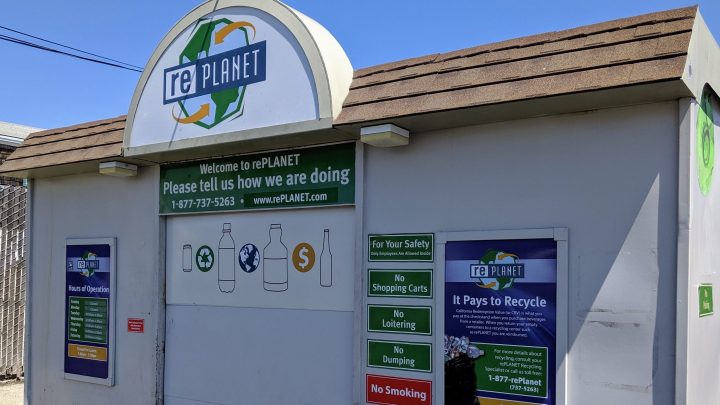 COPY
This RePlanet bottle and can redemption center, shown here on August 6, 2019, is one of two in Alameda, California. RePlanet recently declared insolvency and closed all of its centers in California. Jon Gordon/Marketplace

This RePlanet bottle and can redemption center, shown here on August 6, 2019, is one of two in Alameda, California. RePlanet recently declared insolvency and closed all of its centers in California. Jon Gordon/Marketplace
Listen Now

California’s largest operator of recycling redemption centers shut down Monday, laying off 750 employees in the process.

RePlanet, which operated stand-alone recycling kiosks near grocery stores, closed all 284 of its centers. Company president David Lawrence said the decision was driven by increased business costs and falling prices of recycled aluminum and PET plastic.

“RePlanet wasn’t the first to fail, and it very likely won’t be the last,” said Jenna Abbott, executive director of Protect CRV, a statewide group of recycling centers. Three years ago, RePlanet closed 191 of its recycling centers and laid off 278 workers.

Many California residents now have few or no options for redeeming their recyclables, which is especially concerning for those who live in poverty or experience homelessness and rely on recycling for income.

“It’s going to be an issue for the people we see in the streets collecting those cans and bottles and for whom it’s not an insignificant part of their income,” said Kate O’Neill, an environmental scholar at UC Berkeley.

Consumer Watchdog, a nonprofit that studies issues in California’s recycling industry, estimated that more than 40% of all redemption centers have closed in the last five years. The closures result in consumers only getting back about half of their nickel and dime bottle and can deposits, according to a recent report from the nonprofit.

The closures also mean that more bottles made of aluminum and polyethylene terephthalate, or PET, will end up in landfills. People will either throw their recyclables directly into the garbage or place them in curbside recycling bins, which are often filled with contaminated material that must be discarded.

The recycling industry is in a state of upheaval. For years, America’s junk was China’s treasure. Chinese recycling firms paid good money for our used plastic and paper. But last year, Beijing started rejecting waste it deemed contaminated.

“China took around half of the plastic that we put into recycling bins, and once they stopped, local authorities and recycling companies went from making a profit to having to pay to get rid of the stuff,” said O’Neill.

There is still demand for many of the things we throw away, said Adina Renee Adler of the Institute of Scrap Recycling Industries. She said it’s important to find profitable, second lives for things like soda bottles made of PET plastic.

“My husband and I both own a number of shirts that we wear every day. They’re woven by fibers that originated as a PET water bottle,” she said.

But demand needs to catch up with supply. Americans “supply” some 80 million tons of recyclable waste.