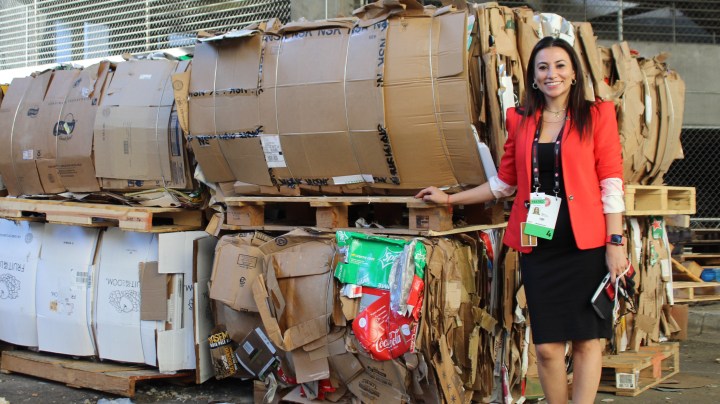 COPY
Sofi Armenakian is the Atlanta Hawks’ director of sustainability. The Hawks want to keep 90% of the waste from their games out of landfills through recycling and composting. Emil Moffatt

Sofi Armenakian is the Atlanta Hawks’ director of sustainability. The Hawks want to keep 90% of the waste from their games out of landfills through recycling and composting. Emil Moffatt
Listen Now

The NBA season this year gave the Atlanta Hawks a chance to do something different. About an hour before a recent home game with the Milwaukee Bucks, a different type of team huddle happened in the basement of State Farm Arena.

“Those of you who have been here, maybe you can share some of your best practices on how it is easy for you to break the ice,” Sofi Armenakian told a dozen volunteers wearing green T-shirts.

Armenakian is the Hawks’ director of sustainability, and the volunteers made up the team’s Zero Waste Squad.

“Those of you who are new, we’re gonna do a quick role play and kind of go over what we are doing,” she said.

What they’d be doing is standing by waste bins to tell fans where to toss the compostable cups, food trays, plates, forks and spoons that come from concession stands and how to recycle aluminum beer cans and water bottles.

The stands are near capacity again this summer at some sporting events across the country — from big-league ballparks to the basketball and hockey playoffs. But as fans enjoy cold beer and nachos at the game, some professional teams are taking a more active role in making sure all that waste doesn’t end up in a landfill.

“That’s what we’re here for”

Even though the compost, recycling and landfill bins at State Farm Arena are clearly marked, Armenakian told volunteers, some fans have a hard time figuring out where things go.

“You can tell somebody walks up and they see the thing that says, ‘Plastic bottles and cans’ and they’re holding a compostable cup that looks like plastic. They’re like, ‘Uhhh?’ And they mean well, but they’re still doing the wrong thing. That’s what we’re here for,” she said.

On a night like this, fans at the sold-out arena will produce nearly 14 tons of waste. Armenakian said the Hawks’ goal is to have at least 90% of it go somewhere other than a landfill. And the Hawks are not the only team looking to reduce waste. Pro leagues around the country have developed sustainability programs in the last decade.

Baseball even gives out the Green Glove Award to the team that does the most to protect the environment. It’s an honor that the San Francisco Giants have won nearly every year. That’s no surprise, said environmental consultant Allen Hershkowitz, who works with a number of sports teams and leagues.

And as more teams and venues seek to stock their concession stands with biodegradable products, more manufacturers, including one based in Georgia, are making them a priority.

Company President Michael Winters said WinCup is investing in the research and development of more sustainable products because that’s where he sees future demand.

“Where are consumers going … in the years and the months to come?” Winters said. “Where can we take this company to bring environmental and sustainable solutions?”

Back at the Hawks game, a fan dropped an aluminum beer container in a recycling bin, earning him praise from James Baskin Jr., a Zero Waste Squad volunteer.

“We just wanted to say thank you,” Baskin said as he handed the fan some Hawks gear and snapped a photo to share on social media. “We’re trying to promote recycling within the arena, and you did a good thing, man.”