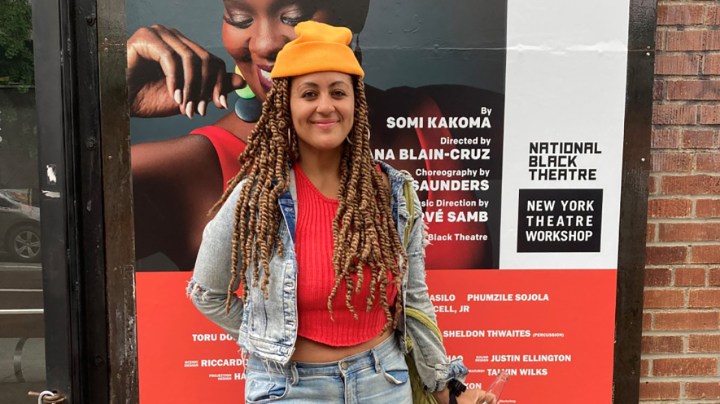 COPY
Lileana Blain-Cruz is nominated for a Tony for directing “The Skin of Our Teeth” and has another play, “Dreaming Zenzile,” about musician-activist Miriam Makeba, opening at the New York Theatre Workshop. Alexandra Starr

Lileana Blain-Cruz is nominated for a Tony for directing “The Skin of Our Teeth” and has another play, “Dreaming Zenzile,” about musician-activist Miriam Makeba, opening at the New York Theatre Workshop. Alexandra Starr
Listen Now

The Tony Awards will be held on June 12. Among the nominees for best direction of a play is 38-year-old Lileana Blain-Cruz, who is of Haitian and Puerto Rican descent. That makes her one of the few artists of color to have been nominated for one of the most prestigious awards in theater.

Last year, Blain-Cruz became a resident director at Lincoln Center Theater, one of the premier arts organizations in New York City. For her first play there, she chose “The Skin of Our Teeth” by Thornton Wilder. It runs 3 hours. In addition to 28 actors, a dinosaur and a woolly mammoth make appearances.

Blain-Cruz encouraged her designer to think big while he crafted puppets to represent the animals. “Remember in ‘Jurassic Park,’ when they turned the bend, and it was like ‘Duh-uh-nah,’ and you saw the brontosauruses and everyone like, ‘Yes!’” she said. “Dinosaurs! That’s what I want.”

A lot happens in “The Skin of Our Teeth.” The Antrobus family goes through the Ice Age, a flood and war. “Too many people have suffered and died for my children for us to start reneging now,” Mrs. Antrobus, the matriarch, declares when her family finally returns home. “So we will start putting this house to rights.”

The play premiered during World War II. Blain-Cruz said it still resonates today, particularly in the era of the pandemic.

“When I was looking for a play,” she said, “I was like, ‘What is going to access the enormity of that event? What is going to give us some kind of catharsis and collective processing of what we’ve just experienced as a global community?’”

Blain-Cruz is bringing more diverse artists along with her to Lincoln Center. “The Skin of Our Teeth” has an almost all-Black cast, including actor Roslyn Ruff.

“I’ve certainly done supporting, and I’ve understudied” on Broadway, Ruff said, “but that is the first time somebody has invited me to have this kind of showcase.”

In her position, Blain-Cruz will direct a play at Lincoln Center every year. She will also help decide what other productions end up on the center’s stages.

“It’s one of the most important positions in the American theater that’s she’s got,” said Rob Weinert-Kendt, the editor in chief of American Theatre magazine. That’s, in part, because shows that appear on Broadway are more likely to be picked up by regional theaters. So Blain-Cruz’s choices will have national implications.

“The Skin of Our Teeth” runs at Lincoln Center through Sunday. Blain-Cruz has another show in previews: “Dreaming Zenzile” at the New York Theatre Workshop, a play about South African musician and activist Miriam Makeba.

Her rise is part of a cultural change on Broadway. Weinert-Kendt said there were 12 shows by Black writers on Broadway this season, including musicals and revivals — compared to just 15 in the past decade.

“So in one season you had almost as much as you’d had in 10 years,” Weinert-Kendt said.

But while the creators are becoming more diverse, the audiences still skew older and white. “I think Broadway does have a problem with sorts of people who go to it are from a certain demographic,” he said.

The pandemic and a slump in tourism have hurt Broadway ticket sales. And tickets aren’t cheap — they average about $125. Blain-Cruz, though, said that over the long run, creating work that reflects a diverse audience will change who goes to shows.

“To see yourself is profound,” she said. “When we invest in that in a particular way, people are more likely to invest their money.”

Visitors to New York will be able to see a lot of shows for free at Lincoln Center, thanks to its Summer for the City program. There will be dance, music and theater — mostly outdoors — through mid-August.

Correction (June 1, 2022): A previous version of this story misstated the length of “The Skin of Our Teeth.” The play is three hours long. Lileana Blain-Cruz’s position has been clarified; she is resident director at the Lincoln Center Theater, part of the Lincoln Center for the Performing Arts.