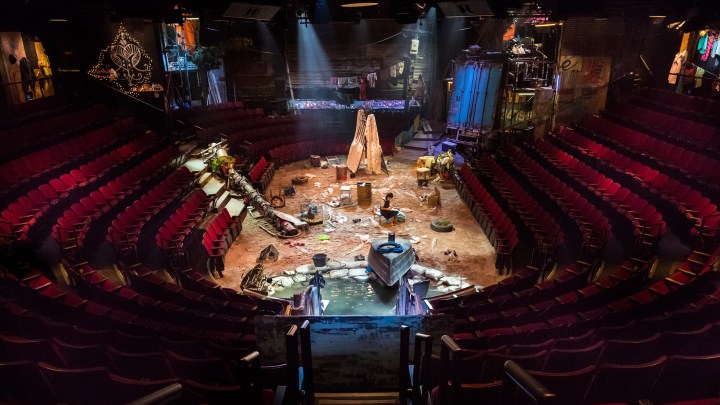 COPY
The set design for "On This Island" by Dane Laffrey. Andrew Kluger

The set design for "On This Island" by Dane Laffrey. Andrew Kluger
Listen Now

This summer marks the 73rd annual Tony Awards, honoring the best work in Broadway theater. And in show business, a lot happens behind the scenes. For live theater, an entire world is created before opening night, as people design the set, costumes and characters for the show.

Before all the musical numbers and standing ovations, economics often take center stage. Dane Laffrey, a set and costume designer, spoke with us about how he became a scenic designer and the importance of understanding economics in theater.

Laffrey’s latest work can be seen in Second Stage’s revival of Christoper Shinn’s “Dying City,” currently running off-Broadway at the Tony Kiser Theater in New York City. He is also involved with the upcoming productions of Disney’s “Hercules” at the Public Theater’s Delacorte Theater in Central Park and “Ghosts” at the Williamstown Theatre Festival in Massachusetts.

I’m Dane Laffrey, and I’m a set and costume designer for theater. Basically, the designer is responsible for everything that you look at in the theater. So any physical object that is onstage is something that I am responsible for. The best design really does go from the macro to the super granular, so you really, like, have a lot of conversations about “Is that the right coffee cup? Should we look at 10 other coffee cups, probably?” To “Where are we, what is this world? What are we wanting the audience to think when they walk in the space?” Sets are like other characters, and what differentiates set design from architecture is that we are not always dealing in the real and the concrete. We also get to deal in the fantastical, the magical, the surreal.

I have certainly worked on shows that have, like, a $1,200 budget and shows that have $750,000 budget. And obviously budget is always a factor. It can be a punishing limitation or it can be a helpful limitation. And having an understanding of economy in the work does have a relationship to the actual economy of making theater, because you sort of know that however big you’re dreaming about it, that thing ultimately sort of has to fit into this kind of a box, not this kind of a box.

I think people come into design from a lot of different places, and certainly for me — but I think it’s a common thread among designers and other theater professionals — is that the first love was theater. But I wasn’t an actor, I discovered that quite early on. Then I eventually found my way towards scenic and costume design, and that was really the beginning of it for me. It’s not because I love to design things, it’s because I love to make theater.”