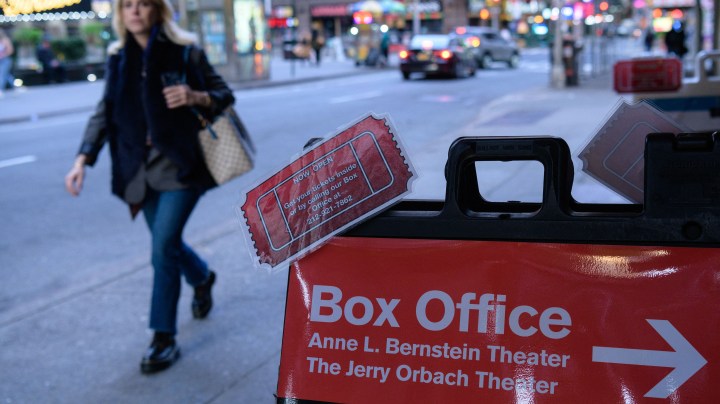 A person in New York City walks past a box office sign for an Off-Broadway production in April 2021. The Actors' Equity Association, a union for actors and stage managers, recently announced a change in membership qualifications. Angela Weiss/AFP via Getty Images

A person in New York City walks past a box office sign for an Off-Broadway production in April 2021. The Actors' Equity Association, a union for actors and stage managers, recently announced a change in membership qualifications. Angela Weiss/AFP via Getty Images

The Actors’ Equity card, historically a challenge for actors and theater personnel to acquire and maintain, is now becoming easier to get in a move union leaders say is aimed to boost equity and diversity.

The Actors’ Equity Association, which represents more than 51,000 members nationally, made the announcement Wednesday that any stage manager or actor who has worked professionally in the United States is now eligible to become a union member.

Before the “Open Access” program, membership was limited to those who were members of a sibling union or who worked for an Equity employer.

The move was prompted by a desire to diversify the AEA and an attempt to rectify past harms, according to AEA officials.

“The old system had a significant flaw: It made employers the gatekeepers of Equity membership, with almost no other pathways to joining,” said union president Kate Shindle in an emailed statement. “The union has inadvertently contributed to the systemic exclusion of BIPOC artists and others with marginalized identities by maintaining a system in which being hired to work those contracts was a prerequisite of membership.”

There are still unanswered questions about the ramifications of this decision, however, and the announcement was met with mixed reactions on social media.

A potential boost in AEA membership means that competition will be heightened during auditions for roles at Equity theater productions. The change is also temporary — effective until May 1, 2023 — while the AEA establishes “a permanent gateway to membership that addresses racial inequities in accessing membership in the union.”

And the move ultimately doesn’t change the gatekeepers who direct, produce and make casting decisions at the theaters — typically larger ones — that can afford Equity actors.

“Casting is in the hands of casting directors and directors and producers,” said Derek Miller, the John L. Loeb associate professor of the humanities in the Harvard English department and head of the Visualizing Broadway project.

Miller said he was surprised by the change, but he hopes it has its intended effect.

“Casting is just a whole set of practices that are tied into various ideologies about talent and merit and representation. And that’s constantly shifting,” he said. “So, I think the fact that the pool of eligible actors would look more diverse, if this indeed goes as hopes, and would encourage a shift in some of those ideas.”

Around the time the AEA was founded in 1913, debates were being had about whether the union should be open or follow the closed-shop model, Miller said. The organization opted to be a closed-shop union, ”in order to enforce its contract and maintain its bargaining power” and to add a climb-the-ladder sense of professionalization to acting.

Though there has an image of “prestige” with having an equity card, that’s not the reason most gig workers seek it out, said Christin Essin, a professor of theater history at Vanderbilt. Rather, it’s for a sense of stability in an unpredictable field, including access to health care, pensions and salary standards.

Skeptics of the switch to open access have wondered the extent to which this was truly a diversity and inclusion move rather than one to boost union dues after a particularly difficult year for those in theater, with most venues closed for part of the pandemic. Through Open Access, members who let their memberships lapse can rejoin with initiation fees they already paid credited toward their joining.

However, Shindle denied that finances were at the root of this decision.

“I am telling you the God’s honest truth when I say that no part of this has felt like any kind of cash grab,” Shindle told Backstage Magazine’s Diep Tran.

Essin is a little more skeptical.

“Union decisions are always financial,” she said in an email, adding that actors have also been hesitant to join Equity in the past for fears of not being able to find continued work.

“Being in the union means rejecting non-union work and the possibility that a good role, even if poorly paid, could be a launching pad to a better job, depending on what producers might see them perform,” she said. “This also means that too many actors take underpaid jobs, however, for the sake of visibility.”

But more members mean a stronger union which means pay is likely to increase across the industry, Essin said. So, the change could have its desired effect.

Continued discussions around the social safety net in the U.S. — from things like universal basic income to child tax credits to pensions — will also continue to shape the changing role that unions, like the AEA, play, Miller said.

The AEA’s decision, coupled with the impacts of last summer’s racial justice protests and the pandemic, will likely ripple out to affect other unions, like those for directors, choreographers or backstage hands. And Miller said it could fundamentally change “what it means to be part of Equity, about what Equity is and who Equity serves.”

“[The AEA] sees a lot of actors and stage managers who are just at the borderline of union eligibility,” he said. “And to the extent that that group of people looks more like the U.S. population than Equity’s current membership does, if Equity can bring them in, strengthen their careers and make the American theater stronger and more like the U.S. population, then that’s great.”