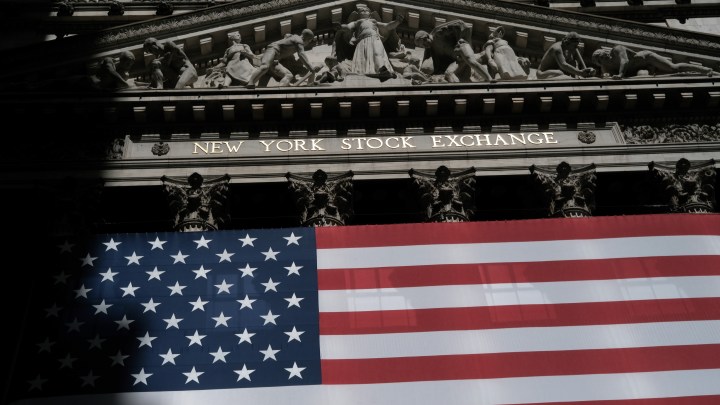 Kai Ryssdal and Richard Cunningham May 23, 2022
Heard on:

Kai Ryssdal and Richard Cunningham May 23, 2022
Heard on:

Some economic forecasters are predicting a slower rate of growth for the rest of the year. According to Neil Irwin, chief economic correspondent at Axios, that may be exactly what the economy needs. In his latest article, Irwin says that if growth slows down enough, it would better allow the labor market, housing market and markets for goods and services to balance with the rest of the economy.

While a slower growth rate would cause inflation to fall, it can also leave the economy vulnerable to a recession. According to a survey from the National Association of Business Economics, more than half of respondents see more than a 25% probability of a recession and more than a quarter believe that a recession will happen in the second half of 2023.

Irwin writes: “Recession risk is real, but the pullback in growth that forecasters are seeing now looks like a healthy thing.”

“Marketplace” host Kai Ryssdal spoke to Neil Irwin about what a slower growth rate would mean for inflation and the prospect of a recession. The following is an edited transcript of their conversation.

Kai Ryssdal: So look, here’s your headline. I’m going to read it to you, and then I need an explanation: “Economists are lowering growth forecasts,” the headline says, “and that’s good news.” Explain, please.

Neil Irwin: So, the economy can only grow so fast without having inflation. Right now, what we have as an economy that’s overheated, we have growth that’s been very strong, 5.5% last year. And economists starting the year thought that would keep up that kind of rate, maybe not quite that fast, but we might get 3% to 4% growth this year. They’re changing that view, everybody’s downgrading their outlook. But I think that’s the kind of thing that makes it more likely that inflation will come down. And we’ll kind of vanquish this inflation monster for now.

Ryssdal: The catch, of course, as you point out, is that slower growth does make us vulnerable to a recession, especially, you say, if there are some unlucky, negative shocks. We don’t need more “unluck” in this economy. What could those negative shocks be?

Irwin: Well, we’re seeing some of them, right — the war in Ukraine, the shutdowns in China, these are things that are already causing supply problems around the world and could worsen and could unfold in any number of ways. Monkeypox, we just learned about. You know that the world is full of shocks, the world is full of bad things that can happen. The point though is that when growth is slower, when there’s slower trend growth, the economy is more vulnerable to actually going into recession because of those shocks. As one example, in 2001, there was the dot com bust, the economy was slowing, kind of limping along. And then the 9/11 attacks happened in September. And that’s what turned it into an actual official recession. So, this is a situation where slower growth, a more kind of “limping along” economy makes us more vulnerable.

Ryssdal: We should point out here — well, I guess I’ll point it out since I’m the one who’s been saying it on this program for the last couple of weeks — this is what is supposed to happen. The Fed raises rates, financial conditions tighten, companies take a second look at things and we are supposed to slow down a bit.

Irwin: Yeah, I mean, look, you just can’t grow at 4% to 5% forever, because of population trends, because, you know, technological advancement only goes so fast. And it’s one thing when you’re coming out of recession, then you’re putting people back to work after the pandemic. All these people out of the workforce, they’ve been coming back in. But eventually, you run out of those people and then, to achieve higher growth, you need to have the resources coming from somewhere. And what we’ve had a lot of the last few months is not that kind of strong, robust growth, but just a lot of inflation. And that doesn’t make anybody happy.

Ryssdal: Let me take you sideways a little bit. Back when inflation was still in the future — and I’m talking about like a year and a half ago — everybody was like, “Oh, my goodness, can we talk ourselves into inflation?” So here’s the flipside of that coin: Can we talk ourselves into a recession? Can CEOs get so worried about the possibility of a slowdown that they preemptively pulled back on capital expenditures and hiring and those kinds of things and make it worse, I guess?

Irwin: It’s certainly a risk, right? There’s definitely a change happening in sentiment among executives. You know, you look at CFOs, surveys, things like that, that can affect hiring plans. You know, for now, what, for example, the Federal Reserve wants to see is this economy come into some sense of balance by hiring levels, throttling back and having not so much layoffs, but less hiring. That said, it’s also true on the consumer side, the stock market is down a lot this year. And so if you are thinking about buying a house, if you are thinking about spending lavishly on that vacation, maybe you pull back those plans because your stock portfolio is down 20%. Those are the kinds of things that are the ways that financial markets can affect the broader economy.

Ryssdal: All right, so let me put you on the spot a little bit. Do you think Jay Powell can get us to that soft landing? And I’ll take a discursive answer as opposed to a hard yes or no, you know, because it’s a matter of some subtlety, right?

Irwin: It is, like, I’m an optimist. I think this is plausible, I think there is a pathway to a few quarters of growth. It’s more in the, you know, 1% to 2% range rather than the 4% to 5% range, and that supply chain stuff can get resolved and the labor market can find a sense of balance without the kind of mass layoffs and things you see in a recession. At the same time, it’s such a narrow landing strip. It’s such a delicate task trying to bring this economy in for that very tricky balance of slower growth, less overheating but not an outright contraction.