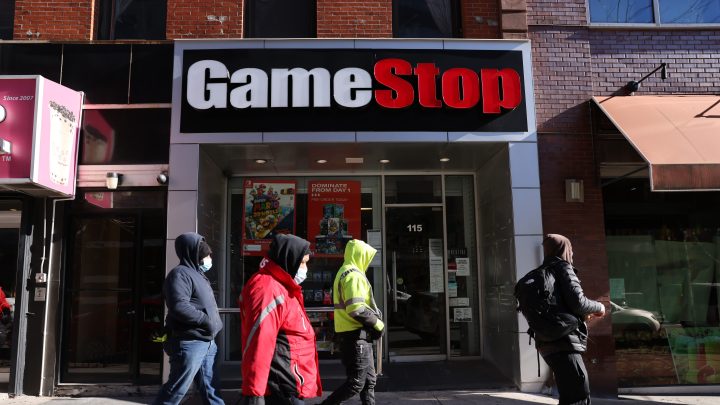 A week ago, GameStop traded at its peak of $483 a share. Thursday, shares in the video game retailer were trading below $60. Neil Irwin, senior economics correspondent for The New York Times, wrote about where the GameStop story fits into stock market history and how regular people can make money through the “laziest, simplest approach” to investing.

“Marketplace” host Kai Ryssdal talked with Irwin about his article. The following is an edited transcript of their conversation.

Kai Ryssdal: I want to point out, first of all, as you point out in this piece, this is not the first time that populism of a sort has come to the stock markets.

Neil Irwin: No. Look, people have been arguing about stocks for a long time. There were the Yahoo message boards back in the late ’90s that were very popular. You know, there have been people cornering the market and doing short squeezes and having weird technical shifts in markets for as long as there have been markets.

Ryssdal: But there does seem to be an anger now. Do you agree?

Irwin: Yeah. You know, in my reading of financial history, I don’t know of a lot of instances where there’s a huge swing in the market driven by people who want to, you know, take it to the powerful and really bring down the system. And we’ve seen a lot of that kind of almost an anarchism in some of the language and rhetoric we’re hearing out of the Redditors who have driven these swings in GameStop.

Ryssdal: Do you think, though, that some of that anger is not misplaced, if I could do the double negative, right? Because for a long time, the rich have been getting richer and the poor have not in this economy.

Irwin: Yeah, right. There’s no question that this has been a period of widening inequality, and especially wealth inequality. You know, we’ve had a real surge in financial market prices and asset prices over the last year and over the last many years. That benefits people who have assets. So if you started this runup with, in good shape with lots of wealth, you’ve done pretty well. So I understand why there’s a lot of people who think the system is rigged, who think it’s unfair. That said, I would argue that there are ways to take advantage of that rather than think that you can somehow bring down the system by shorting a small-cap stock.

Ryssdal: Well, so let’s talk about those real quick because your, your basic gist in this piece is get in the market, be there for a long time, sit on your hands and your money is going to grow.

Irwin: Yeah. So this is not some new piece of, kind of financial advice or personal finance advice. This is what every personal finance advice person has been saying for decades. But the math is clear-cut. You know, if at any point over the last several decades, you’ve had money to invest and just put it in an S&P 500 index fund, reinvested dividends, kept fees low, tried to avoid taxes, you’ve done quite well and you have doubled or tripled your money, depending on the exact time horizon if you had the patience to just stick it out and not overreact to swings in the market.

Ryssdal: All right. So look, let’s talk about what happens next, right? Because [Treasury Secretary Janet] Yellen said this morning on “Good Morning America” that she’s meeting with regulators to look at this. There will be hearings up and down Capitol Hill on this. Do you think there’s going to be substantive regulatory change?

Irwin: I mean, the weird thing is, this push is coming from two different and opposite directions in Washington. You have people simultaneously saying, “Oh my gosh, you know, how could Robinhood have shut down some stock transactions when people wanted to engage in this? People should be free to play in the market the way they want.” On the other hand, you’re seeing people say, “Well, why is no one protecting investors from themselves and potentially taking risks that really are not appropriate to their level of wealth and risk appetite?” How those intersect in Congress, in the Treasury and the [Securities and Exchange Commission], I think we really don’t know yet.