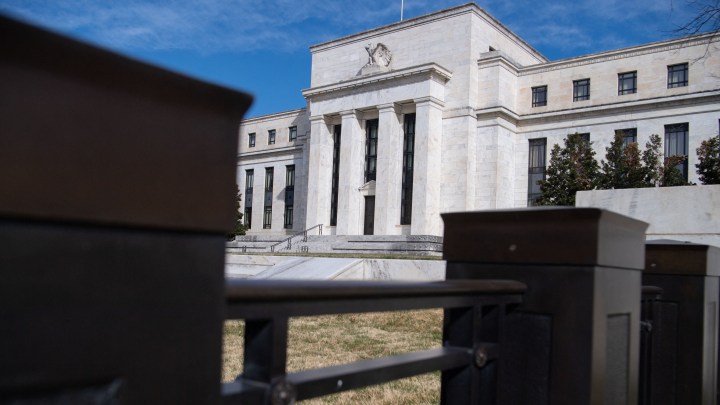 COPY
The Federal Reserve isn't always successful at taming inflation while avoiding a recession. Plus, the pandemic and war in Ukraine make the Fed’s job more difficult. Saul Loeb/AFP via Getty Images

The Federal Reserve isn't always successful at taming inflation while avoiding a recession. Plus, the pandemic and war in Ukraine make the Fed’s job more difficult. Saul Loeb/AFP via Getty Images
Listen Now

Inflation’s running at a 40-year high, near 8% in the United States. It’s also painfully high around the world, as Russia’s war on Ukraine and the pandemic scramble up supply chains and drive energy and grain prices even higher.

It is the Federal Reserve’s job (and that of other central banks) to try and tame this inflation, mainly by raising interest rates to slow economic growth.

The Fed raised rates a quarter-point last week, and on Monday, Atlanta Fed President Raphael Bostic said that “getting the high rates of inflation under control is the top concern” for 2022. But he also said that all the global uncertainty has “tempered my confidence that an extremely aggressive rate path is appropriate today.”

Bostic was speaking to the National Association of Business Economists, which just came out with a survey finding more than three-quarters of those economists think the Fed’s monetary policy is stimulating the economy too much and contributing to inflation.

Can the Fed pull it off — tame inflation and not crash the economy into recession?

This is what’s referred to as “bringing the economy in for a ‘soft landing.’” And it’s necessary because the economy is flying too high and hot. The problem starts with us, said Tulane University economist Gary Hoover.

“About two-thirds of the U.S. economy is made up by consumer spending,” Hoover said.

When consumers have a lot of money, like we do now from relief checks and pay hikes, we buy more stuff. If producers can’t keep up, demand outpaces supply and prices shoot up.

So the Fed raises the cost of borrowing — hiking interest rates — hopefully just enough that “we can softly land, in that we can tame inflation without having an economic recession,” Hoover said. “If you look back historically, right, the last time this actually worked was around the ’94, ‘95 period. So more often than not, the Fed doesn’t get this right.”

Plus, every time before, there hasn’t been a global pandemic and a war in Europe, which makes the Fed’s job adjusting supply and demand more difficult.

For instance, “are we going to be able to get the oil that we need? Or are global high oil prices going to make it expensive for our businesses to buy?” said University of Michigan economist Betsey Stevenson.

The U.S. economy does have one big ace in the hole, said Daniel Zhao, senior economist at jobsite Glassdoor. “The labor market remains very healthy. We see that demand for workers is very high, job openings are near record levels.”

Plus, unemployment’s low and hardly anyone’s getting laid off. Still, he said a “soft landing” could be tricky.

“The Fed does have to walk a tightrope, and in some ways, they’re walking that tightrope blindfolded because the environment is changing so rapidly,” Zhao said.

Even so, these economists believe it would take a pretty big reversal and a lot to go wrong to send the U.S. economy into recession soon.