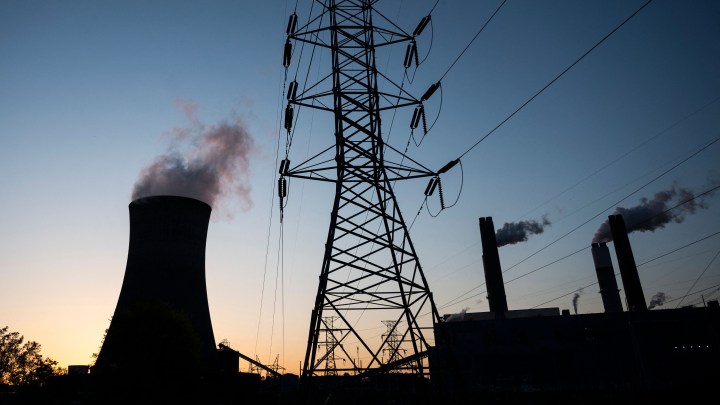 COPY
Though coal prices have surged since the war in Ukraine began, it's likely not a lifeline for the ailing U.S. coal industry. Above, steam rises from a coal power plant in Alabama in 2021. Andrew Caballero-Reynolds/AFP via Getty Images

Though coal prices have surged since the war in Ukraine began, it's likely not a lifeline for the ailing U.S. coal industry. Above, steam rises from a coal power plant in Alabama in 2021. Andrew Caballero-Reynolds/AFP via Getty Images
Listen Now

The price of coal has surged since Russia’s invasion of Ukraine and the sanctions the European Union has placed on Russian coal in response.

Those sanctions announced last month are set to take full effect in August, creating — one would think — an opportunity for coal producers here in the United States. But they’re having trouble cashing in.

Yes, supply chains, shipping costs and all the usual suspects are making it expensive to move the stuff to Europe. Yet a lot of it also has to do with the current state of the American coal business.

U.S. coal production today is about half what it was when it peaked a decade ago.

“A lot of that is driven by the retirements of coal-fired power plants in the United States, which was the major source of demand,” said Mark Templeton, a clinical professor at the University of Chicago Law School.

He summed up the state of U.S. coal this way: “The industry is clearly in decline and is likely to be in continuing decline.”

Some mines, particularly across Appalachia, have shut down. For those still operating, coal executives are passing on making big investments.

“The U.S. coal fleet is quite old, it’s limping along. It’s really lost its power in the market,” said Flora Champenois, a research analyst at Global Energy Monitor.

All of that has made scaling up right now — when the economics are on the industry’s side — tough.

“Are you going to hire someone for the next few months? And then the price may fall again. What will you do with those workers?” Champenois said. “It’s really time to manage the transition. There is no market for coal long term.”

That’s the case in Europe too, despite the current surge in demand as it moves off Russian coal, according to Ian Lange, who directs the mineral and energy economics program at the Colorado School of Mines.

“And so it’s not surprising, right, that they would say, ‘I don’t think there’s a strong buyer here,’ right?” he said.

Maybe a bump for a few months, Lange said. But hardly a lifeline for an ailing industry.