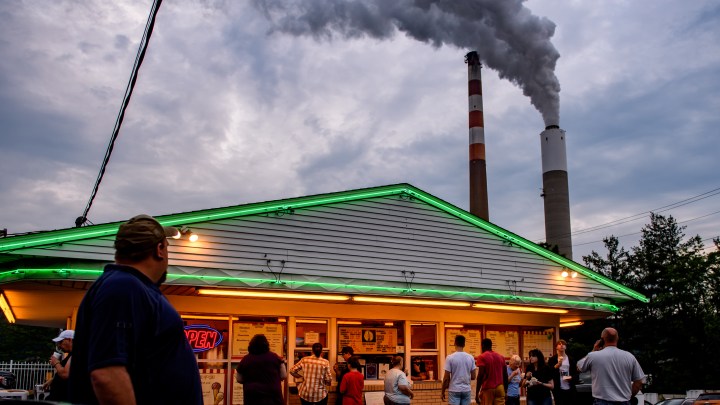 COPY
People line up for ice cream in Cheswick, Pennsylvania, near a coal-burning power station. Existing coal plants in the U.S. are being used more, though that’s likely only temporary. Jeff Swenson/Getty Images
A Warmer World

People line up for ice cream in Cheswick, Pennsylvania, near a coal-burning power station. Existing coal plants in the U.S. are being used more, though that’s likely only temporary. Jeff Swenson/Getty Images
Listen Now

For years, the world’s reliance on coal — the dirtiest of fossil fuels — was falling. That’s not the case anymore.

As the world emerges from the worst of the pandemic, coal is making a comeback. Since Russia’s invasion of Ukraine, the reliance on coal by many nations has only intensified.

There’s a game of musical chairs being played right now by the world’s coal-hungry nations. EU sanctions on Russian coal have its members looking elsewhere. Meanwhile, others are buying Russian coal on the cheap, according to Steve Cicala, an associate professor at Tufts.

The shortage of natural gas is a big reason why, Cicala added. When there’s not enough, coal plays backup, because reliable power is always in demand.

Patrick McGinley, who teaches law at West Virginia University, said that his state — the second-largest coal producer in the U.S. — is still recovering from a bust in the last decade.

“And so the hope is that coal will be experiencing a boom. But I think that’s short-sighted,” McGinley said.

That’s because globally, even the largest coal users are set to cut back despite their needs now, said Sanya Carley of Indiana University. “With several years, we should see a decline from India and China as they start to close some of their coal operations and switch and move more towards renewables like wind and solar.”

Here in the U.S., existing coal plants are being used more lately, although that’s probably temporary, according to Daniel Cohan, an associate professor at Rice University.

“The long-term plans are still for utility companies to close more and more of their coal plants,” he said.

And we’re not building more of them, meaning coal’s current resurgence might not last.