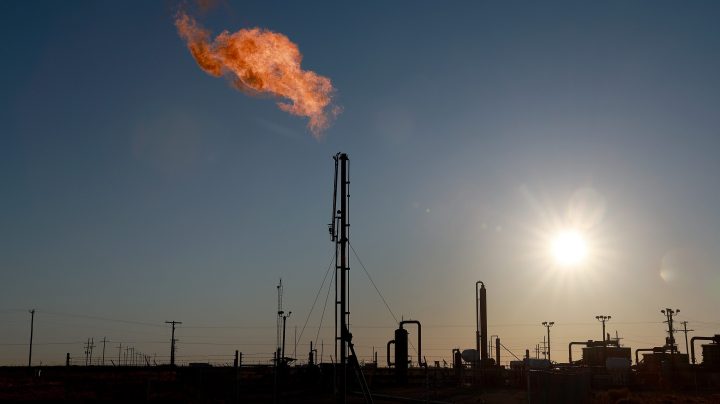 COPY
High gas prices have some wondering why the U.S. isn't keeping more of its liquefied natural gas at home. It's not that simple. Joe Raedle/Getty Images

High gas prices have some wondering why the U.S. isn't keeping more of its liquefied natural gas at home. It's not that simple. Joe Raedle/Getty Images
Listen Now

Earlier this week natural gas prices in the United States rose to just over $8 per million British thermal units, their highest level since 2008, around the time of the shale boom. That price was down a bit Thursday, but still about double what it was this time last year.

That’s because many Western nations stopped buying oil and gas from Russia after its invasion of Ukraine. The boycott has eliminated a chunk of supply, pushing up prices, and the United States is sending record amounts of liquefied natural gas overseas.

Some are asking if the U.S. should hold on to more of the LNG it’s been exporting to keep down energy costs at home.

Liquefied natural gas producers in the U.S. want to cash in on higher prices, said Trey Cowan at the Institute for Energy Economics and Financial Analysis.

And it drives up the price of natural gas in the U.S. too. Natural gas isn’t quite a global commodity like oil is, but more and more, we’re seeing that international prices affect what we pay here.

“Everybody keeps thinking about LNG exports, but we are actually exporting quite a lot of gas via pipeline, mostly to Mexico,” she said.

Those export contracts are often in 20-year increments, so beyond a natural disaster, it’s tough for a natural gas producer to just stop exporting and keep more gas at home to drive down the price.

A big part of the problem is that supply isn’t reacting to $100-a-barrel oil like it has in the past.

And investors are more geared for short-term returns, said Stewart Glickman, an equity analyst at CFRA. There are other factors preventing oil companies from ramping up production quickly.

Beyond supply constraints, demand is different now too. In the past, U.S. power plants would often switch to burning coal when the price of natural gas reached about $3.50.

“One is that we have shut in a fair amount of coal-fired power plants. The other is that coal is also in short supply and high priced as well. So the economics of switching from gas to coal have not been that great either,” Johnston said.

That’s beside the environmental concerns of burning coal, as well.