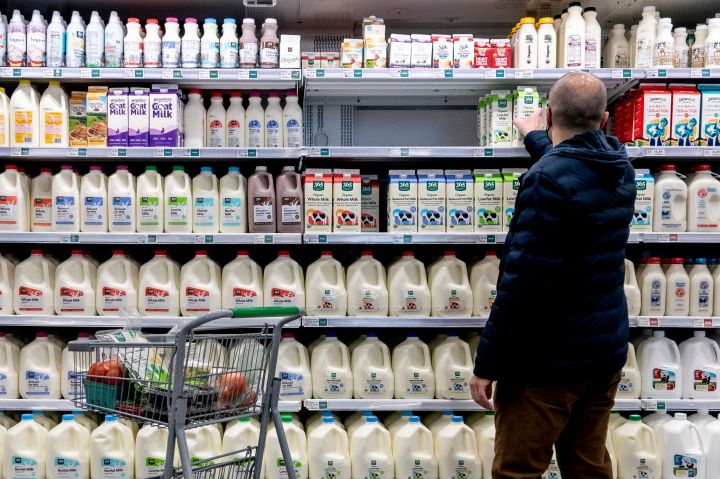 COPY
“One of the biggest misconceptions is actually just what 'inflation' means,” said Robert Rich, director of the Cleveland Fed's Center for Inflation Research. Stefani Reynolds /AFP via Getty Images

The U.S. is in a battle with rising prices. The Federal Reserve is trying to squeeze the excess inflation out of the economy, but how well do we, as consumers, understand this experience?

To help, Marketplace’s Sabri Ben-Achour spoke with Robert Rich, director of the Center for Inflation Research and a senior economic and policy adviser at the Federal Reserve Bank of Cleveland. The following is an edited transcript of their conversation.

Sabri Ben-Achour: What do you think people most misunderstand about inflation?

Robert Rich: One of the biggest misconceptions is actually just what “inflation” means. I think when people see the price of an item moving up, then they think that that’s inflation. And inflation really shouldn’t be associated with the price of a single item moving higher, such as gas or food. When we think about inflation, it really refers to a situation where price increases are broad-based and sustained. So I think it’s really important to think of inflation in terms of a wide range of prices that are not experiencing one-time increases, but instead will continue to rise on an ongoing basis.

Ben-Achour: Do prices ever come back down? Or do they just stop rising?

Rich: In general, most prices are going to increase. And at any point in time, there’ll be some items whose prices are increasing faster than the average inflation rate. There are some items whose prices will be kind of increasing in line with the average inflation rate. Then there will always be some items whose prices will be actually be changing slower than the average inflation rate and may actually be declining. And, obviously, it also depends on the circumstances underlying what happened. An example would be that if you have a commodity and there’s the classic example of a drought, we’ll see the price of, say, oranges or some commodity go up, but then it will eventually come down — but that’s because what was driving that price increase was a temporary factor. But, in general, most prices are typically not going to be declining; we don’t typically see deflation.

Rich: This is actually a really important issue, and I’m glad you asked. I think that the best way to explain the use of measures of inflation that exclude the prices of certain items like food and energy, this core measure you’re talking about, is that they really serve as a means to an end. Food and energy prices can be volatile and mask the part of inflation that’s expected to persist going forward. And so by excluding food and energy prices, it really provides a better signal of how much of the current inflation reading is expected to last. Policymakers can then use the information to set monetary policy to meet the goals of our dual mandate, which includes an inflation objective that is based on the personal consumption expenditures price index that is broad-based and includes food and energy.

Rich: Well, I think part of what the Fed has recognized is that getting people to understand what inflation happens to be benefits both the Fed and the general public. So there is a very concerted effort to try to, in some sense, better educate the public about various topics, including inflation. For example, here in Cleveland, we have the Center for Inflation Research, which actually has a very strong public outreach component, and I’d very much encourage your listeners to visit our website for content explaining basic inflation concepts. I think that there is a benefit in terms of people having a better understanding of inflation — not only for the purpose of conducting monetary policy, but just for the way that they go about making their economic decisions. I mean, a better informed consumer having a better understanding of inflation benefits the consumer in terms of some of their decisions.

Rich: I think there’s actually several reasons why the inflation outlook really doesn’t suggest a return to the ’70s. I think one factor is simply that policymakers can draw upon the lessons learned from the 1970s. I think another factor that’s important is that there has been a notable shift in the monetary policy framework — we now have a specific objective for inflation, which is 2% on average, measured by the PCE price index. Also, improved communication and enhanced transparency for the efficacy of policy, the Summary of Economic Projections. We now understand that there’s a benefit to being very transparent to financial markets [about] what our thinking happens to be in terms of the economy and the outlook. So we’re doing more of that than we did in the ’70s. A couple other factors: Longer-term inflation expectations today remain well-anchored, and inflation expectations, and in particular long-run inflation expectations, are a very important indicator to monitor for the inflation outlook. I don’t think that was appreciated during the ’70s as much as it is today. And then finally, there has been some changes in the structure of the U.S. economy. Labor unions have a smaller presence; COLA, or cost-of-living-adjustment clauses, are not as prevalent. So taking all of these factors together, that underlies my view that we don’t really suggest a return to the 1970s.

Ben-Achour: Do you think we are at the peak of inflation now? Have we reached it?

Rich: That’s a tough call. I think that there are reasons to believe we might be at that peak. There was a recent [consumer price index] report that suggested that goods inflation, which had been the principal driver for inflation over the last year — there’s some initial evidence to suggest that that might be slowing. But, obviously, as soon as we think that inflation may be slowing or peaked, you then have these unexpected events take place. The Russia-Ukraine conflict broke out; now we’ve had these significant lockdowns in China that have taken place. So I think it’s very difficult to say anything about whether we’re definitively at a peak or not because there’s always unexpected events that seem to be taking place.

Ben-Achour: Does the Fed have the right tools to address inflation when its causes are crazy things like the war or lockdowns or bizarre shifts in consumer demand from the pandemic?

Rich: Yes, we certainly have the tools to get inflation back to 2%, although it is clearly going to take some time. The Fed raised its policy rate, the federal funds rate, at the last meeting, and it signaled through the Summary of Economic Projections that it plans to remove accommodation during the course of this year and next year to move inflation lower. The Fed has also mentioned that it’s going to reduce its balance sheet, the holdings of assets such as U.S. Treasuries and mortgage-backed securities. Obviously, other factors may come into play in terms of influencing where inflation is going to be, but I think we do have the tools to do that. It’s just a question of whether or not there will be a continuation of some of these shocks that we’ve recently been seeing.

Ben-Achour: But am I to understand, then, that you think we’ll get down to, say, 3% inflation in, like, a year?

Rich: Well, again, I’m just reiterating what the [Federal Open Market Committee of the Federal Reserve] has stated in terms of their Summary of Economic Projections. They say in 2023, inflation below 3%, at 2.7%. That’s the current projection.

Rich: Well, I think that when we first started seeing the rise in inflation about a year ago, there was a general view that the rise was going to be sort of temporary, transitory. What ended up happening is that there sort of had been a confluence of factors that have caused inflation to end up being much higher and to be much more persistent than what we were expecting. We’ve seen this very significant shift in consumer spending away from services into goods. That really isn’t that surprising because the pandemic sort of was responsible for that shift. But then, on top of that, we’ve had very, very strong aggregate demand — that’s been reflective of both the fiscal stimulus that was put in place at the beginning of the pandemic, very accommodative monetary policy. And then we’ve had these supply chain disruptions, and we’ve also had these bottlenecks appearing in the goods sector, all of which led inflation to be much higher and last much longer than we were anticipating. So I think relative to what our thinking was in the fall, it has turned out to be much higher and much more persistent than we were expecting.