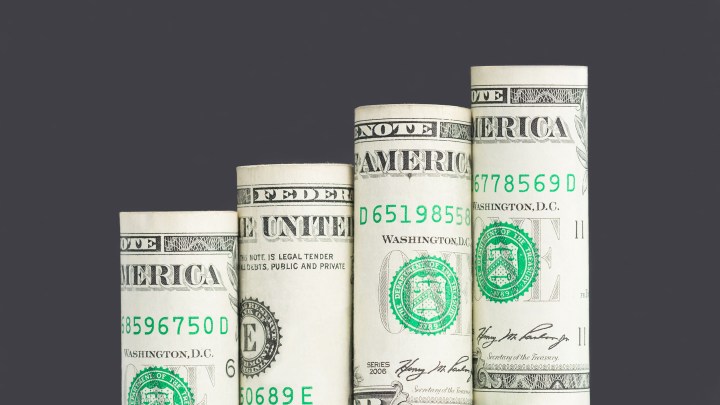 COPY
"The overall pattern of inflation, many things will not be noticeably more expensive," says Joseph Gagnon, senior fellow at the Peterson Institute for International Economics. DavidLeshem via Getty Images
COVID-19

"The overall pattern of inflation, many things will not be noticeably more expensive," says Joseph Gagnon, senior fellow at the Peterson Institute for International Economics. DavidLeshem via Getty Images
Listen Now

The federal reserve and the Biden administration have been trying to prepare the country for temporary, modest inflation this year, around 2.3% or so, as the economy recovers. But some are worried we might see more significant and durable rises in prices.

Joseph Gagnon, senior fellow at the Peterson Institute for International Economics, is somewhere in between. “Marketplace Morning Report” host Sabri Ben-Achour spoke with Gagnon, also a former economist at the Federal Reserve, about the prevailing opinions about how economic inflation will rise and whether that will make a noticeable dent in people’s wallets. The following is an edited transcript of their conversation.

Sabri Ben-Achour: So can we just start by talking about how important the question of what will happen to inflation is? Why is it so critical that we understand what happens to inflation?

Joseph Gagnon: Well, I think inflation affects everybody. And, people have to plan for the future, and if prices rise it affects how they negotiate with their employers over their wages, or how they save for the future. It affects many things.

The view that inflation will be temporary

Ben-Achour: So there are a couple different views on what exactly is going to happen to inflation, and one of them is that it’s temporary. You know, it’s a sort of pandemic hangover, we’ll get over it. Can you explain that view?

Gagnon: Yes. When we went into the pandemic a year ago, inflation fell and prices rose less. And now it’s rebounding. As the economy is starting to reopen, we’re recovering some of those lost price increases. And there may be even a bit more, as there are still some lingering bottlenecks, some places are still having surges in the virus, global trade is still not back to normal. There’s a number of issues that could temporarily raise inflation even a bit more this year.

Ben-Achour: And they’re still sort of like supply chain snarls, where companies can’t get X amount of whatever it is, right? Stuff like that?

Gagnon: Yeah, stuff like that. It’s a bunch of little things. One thing is the crews of the ships that transport all our goods across the oceans haven’t had the normal rotations because they haven’t been able to fly in and out of different countries. They’ve been stuck on these ships for a long time, other crew members who weren’t on the ships when the pandemic struck never were able to get on, and it’s really causing havoc in the shipping industry. The same thing with airlines, a lot of flights were canceled. And so things that airplanes transport didn’t get transported. That’s starting to open up and unfreeze, but it’s still a problem.

The view that inflation will last into next year

Ben-Achour: So that’s one view that we’ll have some temporary inflation pressures, but then it’ll subside. There is another view that says we should be a little more worried. Can you explain that one?

Gagnon: Well, I think that view is more about sort of next year, or very late this year, but probably more like next year. And that is based on the very large size of the stimulus packages, or relief packages, depending on how you want to refer to them. Last year, we had a big package, and a lot of that money was saved. But it could be spent this year or next year. On top of that, in December, we got a $900 billion additional relief package and then just last month, we got another $1.9 trillion package. And this is just extraordinary amounts of government help to people, to states and local governments, to various industries. It’s a lot of money. We haven’t spent this much money from the government, relative to the size of the economy, since World War II. It’s likely to boost spending, beyond where the economy can sustainably produce, which is the way you get more inflation. And that’s more likely to show up very late this year or next year.

Ben-Achour: So where do you think inflation is gonna end up next year?

Gagnon: My sense is that inflation will rise to maybe 2.5% or a bit more this year, as people think. But then, I think next year, it might stay that high or even rise a bit higher to 3% or so, perhaps even more, but it’s hard to be certain. It really depends a lot on people’s savings behavior. But many forecasters, most forecasters that I’m aware of, are forecasting inflation to go back to 2% next year. I don’t think that will happen. Because I think the economy will be very, very strong by then. It will take time, a lot of people aren’t employed now, but they’re coming back into the labor force. We just saw the lowest number of people filing for unemployment benefits since the pandemic began, we saw a very large increase in employment last month, I think we’ll get some more large increases over the summer, very large increases. And by the end of the year, we’ll be close to the normal or pre-pandemic level of the economy and still growing.

Ben-Achour: Economists have been a bit puzzled by inflation for a long time now. You know, it just hasn’t budged much in the past decade or so. And some of the reasons they give are, well, we’re importing stuff from abroad, we managed to find cheap sources of products abroad from one country to the next. The rise of e-commerce has made price competition really competitive. And so inflation just doesn’t work like it used to. What do you think of that?

Gagnon: I think that the world is more open. So there’s a bit of truth to that, but one shouldn’t overstate it. Only about 15% to 20% of spending in the U.S. comes through imports. More than 80% of what we consume is stuff we produce ourselves. So, yeah, some of it will spill over, and we might get more imports — we will get more imports and I think the trade deficit will get larger. But it’s not enough compared to the size of the spending boom we’re likely to get.

How would a larger-than-expected inflation increase affect consumers and businesses?

Ben-Achour: If we do get a larger-than-expected spike in inflation, particularly next year, will that noticeably affect consumers and businesses?

Gagnon: You know, yeah, because I think what will happen is there’ll be specific products or sectors where the price increases will be much more than 3% and it will be noticeable to people, sort of in a way, right now, about the only element of inflation that people ever notice is gasoline prices, because they’re the ones that move the most, up or down. People seem to forget when they move down and they notice when they move up. There’ll be a few more categories, hard to tell, but where the supply bottlenecks might be important.

But the overall pattern of inflation, many things will not be noticeably more expensive. It really will take a statistician to see, “Yeah, well, when we average across all these things, it did move up from 2% to 3% or so, maybe even 4%,” but that will probably reflect a few categories where it went up 5% or 10%, and then other categories where it didn’t change.