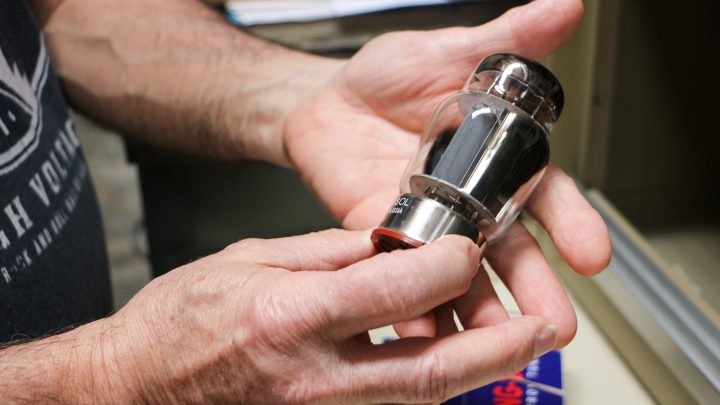 COPY
Todd Sharp holds a vacuum tube — what he says is key to high-quality sound from an amp. Paige Pfleger/WPLN News

Todd Sharp holds a vacuum tube — what he says is key to high-quality sound from an amp. Paige Pfleger/WPLN News
Listen Now

Todd Sharp is surrounded by a mountain of guitar amps. But he’s quick to say some of them are better than others. “That’s kind of my motto here: Life is too short to play shitty amps,” he said with a smile.

He plugs his guitar into one of those amps. He plays a riff and the amp barks back the notes. It sounds tinny and electronic.

“It’s flat,” he said. “It’s a little lifeless.” Then, he plugs into a better amp. It roars to life. The riff crunches together. It’s gritty — alive. “It just makes you want to play the guitar more.”

The secret sauce? That amp has vacuum tubes. They look like little light bulbs, and they’re the glowing heart of high-quality audio amplifiers.

“Vacuum tubes are unique because they have this dynamic feel to them that transfers right to the tip of your fingers,” Sharp said. “Can you hear it? Yeah. But you more feel it.”

He said these tubes are the difference between a mediocre sound and a magical one.

The hitch? There are only a few factories in the world that make them.

One of them is in Slovakia. And another is in Russia, owned by American businessman Mike Matthews, who hopped onto a Zoom call with a cigar in his mouth, drinking coffee out of a red plastic cup.

Matthews talked about how he became the owner of a vacuum tube factory in Russia. It started with a trade show there in 1979. He was selling guitar pedals.

“I got carried away,” he said, “and brought a whole rock and roll band over to Russia.”

He said his company got a lot of attention but not many buyers. So he started thinking of ways he could start buying parts from Russia.

“I said to myself, ‘Those vacuum tubes are used in guitar amps, and I’m in the guitar amp business,’” he said. “I bought some. I had them ship some samples.”

And he started selling them in the United States. Then the factory in Russia nearly went under. So Matthews decided to buy it.

But a few weeks ago, Matthews found out his vacuum tubes were on a list of items that could not be shipped out of his factory in Russia because of retaliatory sanctions against the United States.

“I immediately sent an email to all of my customers,” Matthews said. “Many, many hundreds of manufacturers and tube distributors to give them a heads up that we can’t ship.”

And that email, well, it had quite the ripple effect.

“I think it’s safe to say there were no more vacuum tubes in North America,” said John Capito, who repairs and builds amps in Nashville, Tennessee.

He said people were in a frenzy, wiping out the local stock of tubes and posting them on eBay for double, even triple the price. Usually, he pays about $45 for a pair of new tubes. Now, he’s seeing used tubes going for more than $100 a pair.

“That is something that really reaches all the way across the ocean here to my daily life,” he said.

In response to the tube panic, Western Electric, a factory in Rossville, Georgia, plans to revamp production of vacuum tubes for guitar amps.

“People want to see a return to availability, and I guess the ‘made in America’ thing is very, very important as well,” said Cobi Boykin, who works for the company.

But he said full-scale production isn’t likely for about a year.

As for the factory in Russia, Matthews said the Russian government has given permission for it to start shipping again, perhaps as soon as this month.

Until then, amp makers are hoping that once the panic subsides, the market will even out again, just like the run on toilet paper at the start of the pandemic.