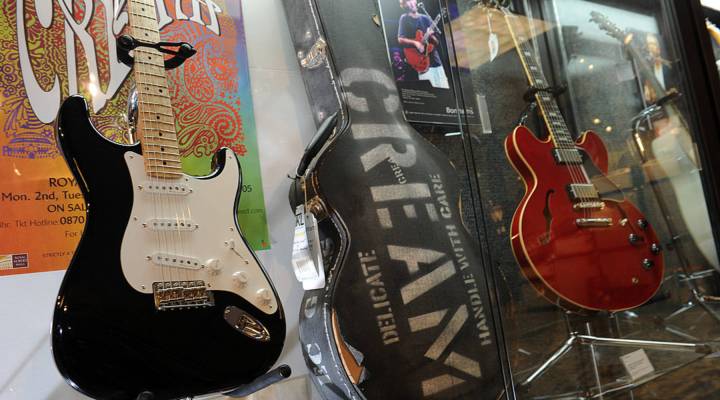 Brad Tolinski was editor in chief of “Guitar World” magazine and his new book co-authored with Alan Di Perna is called “Play It Loud: An Epic History of the Style, Sound and Revolution of the Electric Guitar.”

[It was] a pretty homely little instrument, it actually looked like a frying pan. But the interesting thing about it is that it doesn’t really sound much different than guitars do these days. It sounded pretty good.

“Patent for the first commercially-produced electric guitar, the ‘frying pan'”

On Charlie Christian, one of the first great electric guitar players:

In the ‘30s, Benny Goodman had a big band. And Benny was the equivalent of like, the Beatles or Elvis at that time… And Goodman had this A&R kind of music advisor, this guy named John Hammond who was pushing hard for this young musician from Oklahoma named Charlie Christian, [he was] 22-years-old. But there were two problems: Christian was black at the time when Jim Crow and segregation laws were still in full effect. And Benny Goodman, his band was white. And the second was he played the electric guitar, which considered at that time to be, at best, a novelty… Goodman decided that Christian’s talent was just too monumental to ignore and, you know,  did the smart thing, put him on radio. Christian overnight became a superstar. You know, it was the first time many, many people had even heard the electric guitar. I always said, it was almost as if The Beatles had hired an accordion player at the height of their success.