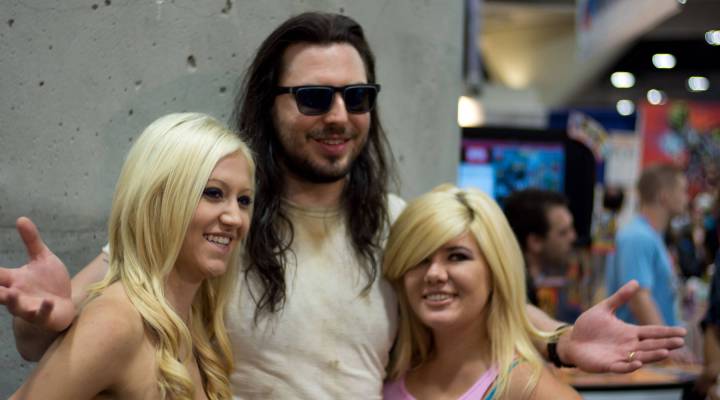 Fill in the blank: Money can’t buy you happiness, but it can buy you ____.

Money can’t buy you happiness, but it can buy you pizza, which is synonymous, or which is as close as it needs to be for me.

When did you realize partying could be a full-time career?

Well, I think in order to make something a career or profession, there has to be some sort of acceptance or agreement with the rest of the world, or a portion of the rest of the world that this can work, they will support this. Others have to allow you to become professional at something, I mean, I guess you could pay yourself but that wouldn’t last too long. So, once other people were willing to give me this chance, I realized, “Well, I really am able to get away with this.”

I’m very thankful that I have managed to somehow keep hold of this first guitar I ever got, and I’m not really a guitar player so this doesn’t actually have a lot of significance to me, it just happens to be one of the only objects that I’ve had since I was probably 3 years old, and I’ve always had it. And I didn’t really even care about it very much, it’s a very poor quality guitar. Although I did learn how to play somewhat on it, and developed my very poor quality playing through this poor quality guitar. So, I guess I am fused to it in that way, although I would never blame the guitar for my poor skills. Yet somehow, I just always continue to have it and have taken it with me wherever I’ve gone, or wherever I’ve been. It’s always been someplace in the vicinity. And it’s strange, because I really did not make an effort to keep track of it. It’s just there and I don’t really have much connection to it, other than it’s the one object that I can remember having since I can even remember having thoughts at all.

Well, I think the very first job that I actually got paid for that wasn’t setting up a garage sale, or mowing my parents lawn, or babysitting, was taking over and filling in for my friend on his paper route. And the reason that was so much different than babysitting or yard work or helping out neighbors, was because this involved all these strangers, these individuals that I didn’t know that were relying on me to provide them with a fresh newspaper early in the morning. It was completely overwhelming, I did a very bad job, and I never did it again.

The first album that I ever requested to be bought for me, with my own, I guess, allowance that I had saved up or just pleading to my mom to spend her money on, was the “We Are The World” album. I really like that song, still do of course, but it made a big impact on me. My mom had bought me albums, children’s music and things like that, and I did enjoy those, but I sought this one specifically on my own, having heard this song, in some capacity, probably on TV or on the radio, and said, “I want that!” And so we went to the grocery store, where they sold albums and I got it.

Well actually, I was very fortunate to have the best advice given to me before I started my career, which was, “Don’t take any other people’s advice too seriously.”