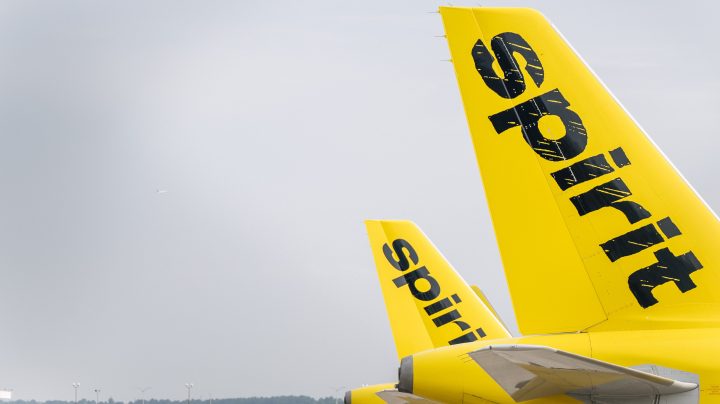 A bidding war has begun in the airline industry. In February, Spirit and Frontier Airlines announced a merger. Now, JetBlue has stepped up. It wants to buy Spirit, and at a steep price — $33 per share. The deal would make JetBlue and Spirit the fifth-largest airline in the U.S.

When one airline buys another, it’s essentially gobbling up a bunch of resources that will help it grow fast, according to Henry Harteveldt, an analyst with Atmosphere Research Group.

“Aircraft, routes, maybe access to a hub and, depending on the market, pilots and other employees,” Harteveldt said.

Because all airlines kind of do the same thing, it may seem like any deal between two companies makes sense, as if comparing two airlines is like comparing apples and apples.

“That’s certainly the case with Spirit and Frontier,” Harteveldt said. Both are budget airlines, apples. “JetBlue and Spirit are more like an apple and an orange coming together.”

JetBlue is known for its brand-name snacks and TVs on every seat. Spirit is all about cheap, no-frills flights. Customers pay extra for seat selection, drinks and carry-on bags. Because of this, said industry analyst Robert Mann, the two airlines have very little customer crossover.

“I think it would probably raise some eyebrows,” Mann said of JetBlue’s loyal customers.

It could also raise eyebrows among employees. Jay Sorensen, president of IdeaWorksCompany, an airline consulting firm, said this is one of the trickiest parts of a merger.

Then there are the time-consuming and expensive logistics, like aircraft overhauls and union issues. Safety regulations will have to be reevaluated and go through a lengthy clearing process.

And, whatever deal happens, Frontier and Spirit or JetBlue and Spirit, could face antitrust scrutiny. “One of the things the Department of Justice looks at is the overlap between two carriers,” Sorensen said.

JetBlue and Spirit have some, with a regional focus in the eastern part of the U.S. The Department of Justice might also look at how an acquisition would change the industry. While this buyout could push flight prices lower across the board, it may raise Spirit’s prices and narrow the low-cost carrier space.