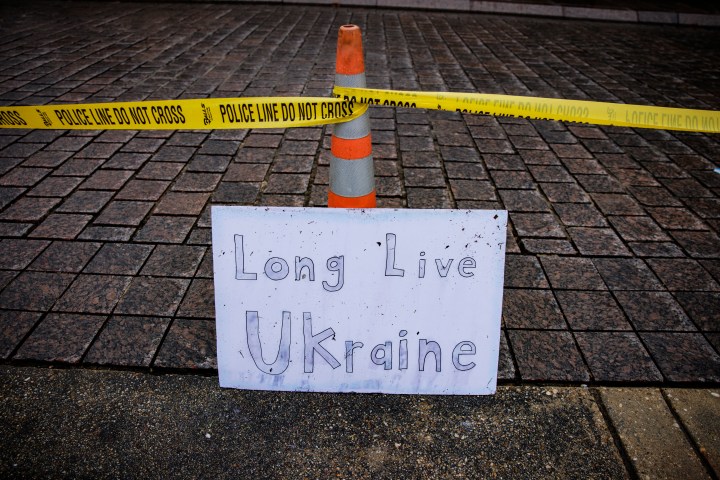 COPY
A pro-Ukraine sign at the Russian Embassy in Washington, D.C. Since Russia's invasion of Ukraine, many countries want to reduce their reliance on Russian energy sources, including in the nuclear field. Samuel Corum/Getty Images

A pro-Ukraine sign at the Russian Embassy in Washington, D.C. Since Russia's invasion of Ukraine, many countries want to reduce their reliance on Russian energy sources, including in the nuclear field. Samuel Corum/Getty Images
Listen Now

We can add uranium to that list. Russia plays a major role in the worldwide nuclear power industry, which uses uranium as fuel.

Only about 5% of the uranium consumed worldwide is mined in Russia, but mining is only the first step in turning that fuel into energy. The next step is enrichment.

“And enrichment is basically the step that gets you the fuel that’s needed to run light water reactors, which is the majority of reactors in the world,” said Jonathan Hinze, president of UxC LLC, a nuclear fuel market analysis firm. He said Russia has about 40% of the world’s capacity for uranium enrichment.

So if you’re a developing country looking to transition away from, say, coal to nuclear to produce electricity, Russia’s going to be part of that discussion. Or it was.

“When you look around and you do a bid for who’s going to build your plant, up till two months ago, the Russian plants were a very attractive option,” Bazilian said.

So, most of the 32 countries that use nuclear power rely on Russia for some part of their program. That includes the U.S., which currently has the world’s largest number of operating reactors with almost 100. They account for about 20% of this country’s electricity.

A trade agreement limits Russia to supplying no more than 20% of the uranium in U.S reactors. David Schlissel at the Institute for Energy Economics and Financial Analysis said now some are calling for a ban on Russian uranium.

“It’s clear that we don’t want to be dependent on Russia. We certainly need to not rely on questionable sources,” Schlissel said.

But an all-out ban could delay a couple of nuclear projects under construction. That includes one in Wyoming with a price tag of $4 billion spearheaded by a company called TerraPower — co-founded by former Microsoft CEO Bill Gates. It’s using advanced nuclear reactors that are smaller and ultimately less expensive than conventional systems.

Denia Djokic at the University of Michigan said they require a specific type of uranium fuel called high-assay low-enriched uranium, also known by the acronym HALEU. Unfortunately, “Russia is actually one of the main suppliers of HALEU to these advanced reactor technologies,” she said.

TerraPower has said it will not use Russian HALEU, but there are currently no other options for commercial-scale supply of the fuel, even from friendly foreign nations.

The war in Ukraine has prompted some lawmakers to talk about onshoring uranium production.

But any plan to increase domestic production will have to address this country’s checkered past when it comes to mining for uranium in Native and Indigenous communities.

The Environmental Protection Agency says more than 500 abandoned mines remain from large-scale uranium production across the Navajo Nation in Arizona, Utah and New Mexico. And until 2010, the federal government was planning to store nuclear waste in a Nevada mountain that’s sacred to the Western Shoshone.

Djokic said that if nuclear power is going to be a key component of America’s energy future, Native communities need to be involved.

“So from mining to milling to the actual run reactor to waste disposal, who benefits? Who loses? Who gets the clean power?” Djokic asked. “And who has to live with decades of a contaminated environment in their communities? And how is that distributed? How can we understand that through a lens of social justice?”

The U.S. Department of Energy has funded an initial demonstration of HALEU production, but the project will last only to the end of this year and yield a minuscule amount of fuel.