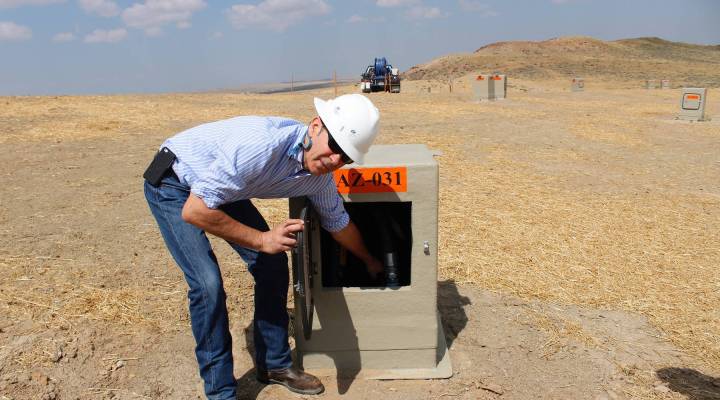 COPY
Nichols Ranch Manager Bernard Bonifas reaches into one of the hundreds of tan boxes dotting the landscape at the Nichols Ranch uranium mine. They keep injection and recovery wells insulated during Wyoming’s harsh winters.  Madelyn Beck/ for Marketplace

Nichols Ranch Manager Bernard Bonifas reaches into one of the hundreds of tan boxes dotting the landscape at the Nichols Ranch uranium mine. They keep injection and recovery wells insulated during Wyoming’s harsh winters.  Madelyn Beck/ for Marketplace
Listen Now

The U.S. used to be the world’s number one uranium producer, and most of it came from Wyoming. But since the 1980s, production has dropped precipitously. These days, prices are too low for most U.S. uranium operations to make any money. But that may be about to change – uranium’s biggest customer is the nuclear energy industry. In the coming years, hundreds of new nuclear reactors are planned for China and India.

Uranium companies in the U.S. are banking on the possibility all that demand will drive up prices, creating an industry boom.

Elements of the Market

Uranium doesn’t have the best reputation. People remember disasters like those at Three Mile Island and Chernobyl. While those types of accidents are rare, they can be extremely dangerous and have a huge impact on the uranium market. Every time there’s a nuclear accident, nuclear energy goes out of favor, plants are shut down, there’s a uranium glut and prices drop.

Uranium’s latest price meltdown followed the 2011 accident at the Fukushima nuclear plant in Japan, after the massive earthquake and tsunami there. In the aftermath, Japan powered down nuclear reactors and sold off already-purchased uranium onto the world market, driving prices into the floor.

“U.S. uranium production is at a level we haven’t seen in decades,” Scott Melbye, executive vice president of Uranium Energy Corp., said this summer at the Global Uranium Symposium in Wyoming. At the time, prices had dropped to around $20 a pound, 70 percent lower than they were in early 2011.

“We’ve got to hunker down and survive in what is a very difficult, one of the most difficult market conditions I’ve seen in my career,” Melbye told the audience. “But if we can position ourselves to be ready to respond when prices turn, I think it’ll be very good news for everyone in this room and for U.S. energy security, and good for the nation.”

That price turn may be around the corner. China and India combined are building 26 reactors and plan to build nearly 250 more in the coming years. And that’s going to take a lot of uranium. Add to that support from the Trump administration for a revived nuclear industry in the U.S.

In financial filings, one uranium company predicted that prices may go as high as $80 per pound in the next 5 years.

Wyoming’s lower-cost uranium operations could have an edge when that happens.

“Well, I think clearly we’ll be leading U.S. production,” Melbye said, speaking outside the symposium. “Wyoming has a core of producers already in place. So you know, you have the ability to increase pretty dramatically.”

At least five companies are already buying up or shaping up Wyoming properties. Melbye’s company, Uranium Energy Corp., is one of them. Itjust purchased a mine in northeast Wyoming. Melbye said the mine already has its license and permits, and has, “one foot on the brake and one foot on the gas.”

Melbyesaid for now, his company is just sitting on the assets, waiting for the market tide to turn. “And, I think we’re setting up for that,” he said. “It’s inevitable. I don’t know if its imminent, but it is inevitable.”

The uranium industry still has a rocky road ahead. Industry veterans estimated that uranium prices will start to really come back between 2020 and 2025, but production would likely drop before that and some companies may fold.

Nuclear energy accounts for 20 percent of U.S. electricity. Right now, nearly 80 percent of the uranium needed for those plants comes from other countries like Russia, Canada, and Kazakhstan.

A point of contention

Still, the Natural Resources Defence Council (NRDC) contends that the uranium market might not rebound that much, especially with slow nuclear growth outside Asia.

“We think in western democracies and in western Europe and the United States, we don’t see any future for the nuclear industry for quite some time, if at all,” said Geoffrey Fettus, a senior attorney at the NRDC.

Even if uranium mining doesn’t grow, Fettus said it needs more oversight to protect limited western aquifers, which are impacted by the mining. He said he wants more groundwater testing before mining starts, in neighboring aquifers and after mining is done. As western towns reach for out-of-the way aquifers, Fettus was concerned that they wouldn’t have usable water to reach for.

“It’s slightly weakened from the first iteration, but it’s still a dramatic improvement,” he said.

Goranson from Energy Fuels doesn’t deny that in situ mining alters the groundwater where the mining takes place. But he said the rule wouldn’t improve environmental safety or public health beyond what’s already required.

On Dec. 14, Wyoming Republican Senator John Barrasso sent a letter to EPA Administrator Scott Pruitt to ask that his agency abandon the proposed rule on groundwater and in situ uranium recovery.

This story originally ran on August 30, 2017 in Inside Energy.