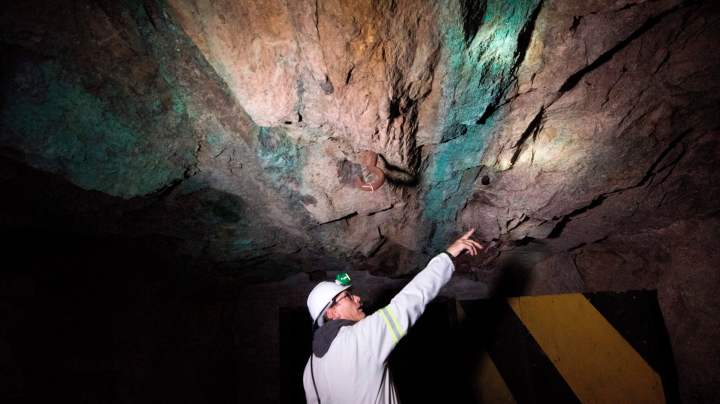 COPY
The U.S. used to be a leader in mining and refining rare-earth elements into finished products. Above, a geologist points to monazite, which contains rare-earth minerals, in a South African mine. Rodger Bosch/AFP via Getty Images

The U.S. used to be a leader in mining and refining rare-earth elements into finished products. Above, a geologist points to monazite, which contains rare-earth minerals, in a South African mine. Rodger Bosch/AFP via Getty Images
Listen Now

“Is your right arm OK?” asks the radiology nurse as she tapes an IV to my arm. “Yes,” I say through clenched teeth, bracing for the needle.

I’m about to get an MRI of my brain as part of a study I volunteered for, but first they have to inject me with something.

“So we are about to give you gadolinium contrast, which kind of makes the arteries pop up better in the image so we see smaller veins and arteries as well,” I’m told. Around 30 million doses of this agent are administered each year worldwide.

Gadolinium is one of 17 so-called rare-earth elements. They have their own separate section in the periodic table and have names like neodymium, praseodymium, europium, promethium.

“They are so special because they have chemical and physical properties that are very useful for a very wide range of technologies,” explained Rebecca Abergel, assistant professor of nuclear engineering at the University of California, Berkeley, and a faculty scientist at the Lawrence Berkeley National Lab.

How we use rare-earth elements

Some rare earths can make things glow in the dark (strontium aluminates), some are supermagnetic (neodymium), some are radioactive (promethium). They’re used in cancer treatment and electric engines, telescope lenses and TVs, cellphones and fighter jets. And many are extracted and refined almost entirely in China.

The U.S. was 100% net import reliant on rare-earth elements in 2018, importing an estimated 11,130 metric tons of compounds and metals valued at $160 million. Eighty percent of those imports were sourced from China, according to the U.S. Geological Survey.

“We call them rare earth, but we produce a lot of them,” said Gauthier Deblonde, a scientist at Lawrence Livermore National Laboratory in the nuclear and chemical sciences division. “Global production is about 250,000 tons, so if you compare them to something actually rare, like gold, we produce about a thousand times more rare earths than gold every year. The name is very misleading.”

Rare earths are chemically very similar, which is why purifying them is so difficult.

“It’s a very harsh process that involves a lot of separation steps,” Abergel explained. The final step involves using organic compounds that can somewhat discriminate between rare earths and then attach to the elements and form a sort of cage around them to make them easier to manipulate. “You need to repeat this process many times so you can achieve good enough separation and purities.” At scale, it requires large quantities of acids, bases and solvents.

“The key here isn’t the access to the concentrate in the ground, it’s the processing that’s the bottleneck [that China has] been able to get scale around,” Chewning said. China has made use of its rare-earth dominance before, he said.

It cut off exports of the materials to Japan in 2010 during a diplomatic disagreement. From 2010 to 2014, China restricted global exports, sending prices of rare earths surging until it lost a case challenging the practice at the World Trade Organization. The U.S. argued at the time that the export controls were to boost Chinese industries and hurt foreign competitors. And in February, the Financial Times reported China was assessing whether a rare-earth export ban would hobble U.S. production of fighter jets.

“Everyone’s keenly aware of the leverage that control over this important global commodity has,” Chewning said.

U.S. was once a world leader

The U.S. used to be a leader in mining and refining rare-earth elements into finished products.

“And now we produce none,” lamented Curtis Moore, referring to the finished product. Moore is vice president of marketing and corporate development at Energy Fuels, the largest uranium producer in the United States. Many reasons are given for the evaporation of the U.S. supply chain.

“The U.S. does have very stringent regulations concerning human health and environment — as we should have — but that often makes our production more expensive,” Moore said.

With more lax regulations, China has paid a steep environmental price for its perch atop the global supply chain.

The last U.S. company making rare-earth supermagnets was Magnequench, which was controversially sold in 1995 to a consortium with close ties to the Chinese government. Its operations were moved to China and Singapore over the following decade. Molycorp, a now-defunct group that at one point owned the Mountain Pass rare-earth mine in California, went bankrupt in 2015.

China made supply chain a priority

“President Biden and this Administration recognize rare earth minerals are essential to American industry and to American’s defense base,” a National Security Council spokesperson said in an emailed statement this week. “It is why we directed an immediate 100-day review across federal agencies to address vulnerabilities in our supply chains, including for rare earths.” The White House says it’s coming up with ways to incentivize domestic production.

President Donald Trump issued Executive Order 13817 directing the government to adopt a strategy for critical materials. The Department of Defense has, as a consequence, offered tens of millions of dollars in grants to help bring processing capacity to the U.S.

Last year, Congress ordered the Department of Defense to eliminate all Chinese sources from the national defense supply chain of rare-earth magnets.

“The government is investing in new capability trying to establish every element of the supply chain,” said Jeff Green, president of lobbying firm J.A. Green & Co. “The question is whether we can do this economically.”

Several private producers are trying to do so.

“Our mission as a company is to restore the full supply chain,” said James Litinsky, CEO of MP Materials, the new owner of the U.S.’s only rare-earth mine, located in Mountain Pass, in California’s Mojave Desert.

“We are probably further ahead than people realize.”

MP Materials restarted the mine in 2017; the previous owner, Molycorp had declared bankruptcy a few years prior.

“It was mismanaged for some time,” Litinsky said. Mountain Pass’ reserves are particularly rich in rare earths and now supply, in unpurified form, 15% of the rare earths consumed globally each year.

“We have a sustainable site, we operate proudly in the state of California, 95% of the water is recycled, we have dry tailings, which is unique in the mining materials industry,” Litinsky said. “We actually do have the means to lead economically and environmentally.”

Litinsky said the mine can cover all of the U.S. military’s rare-earth needs, and they’re developing a processing plant to purify the most important rare earths for electric vehicles — a looming source of demand.

“The military demand is single digit. The bigger demand is gonna be the electrification of the global economy as we focus on climate change,” he said.

Energy Fuels, the uranium miner, is also building a refining facility in Utah.

“The industry has come a long way,” said Moore, the company’s vice president. Energy Fuels extracts radioactive uranium and thorium from a mineral called monazite, which also contains rare earths. “We are producing a clean rare-earth product that we are selling to a separation facility in Europe.”

Eric Chewning at McKinsey said there are still two things he sees as threats to this resurgent American rare-earths industry. One is its small size, compared to the scale of Chinese production.

“The second challenge is the Chinese control the global price through export quotas, so if they wanted to, they could just flood the market with additional rare-earth metals and then wait for you to exit,” he said.

Litinsky with the Mountain Pass mine is adamant the U.S. can compete with China no matter what.

“This idea that we cannot compete with China is just flawed,” he said.

“Look at EVs, and globally you’re looking at more than 10, 15% growth year on year throughout the whole of the next decade,” said Andrew Miller, product director at Benchmark Mineral Intelligence. “You can build a new electric vehicle factory in a couple years, you introduce new models in three or four years in the timeline of most automotive companies. To fund, to start and to refine the processing from a new raw material facility, you’re looking at five to seven years.” The raw materials side of the supply chain will have to work especially quickly, Miller said, to catch up to the trajectory of demand if a domestic supply chain is going to work.

And thus the race is on to assemble a supply chain upon which national fortunes and the green economy will be built.

Correction: A previous version of this story misstated the location of some of Molycorp’s former assets following its bankruptcy. The text has been corrected.