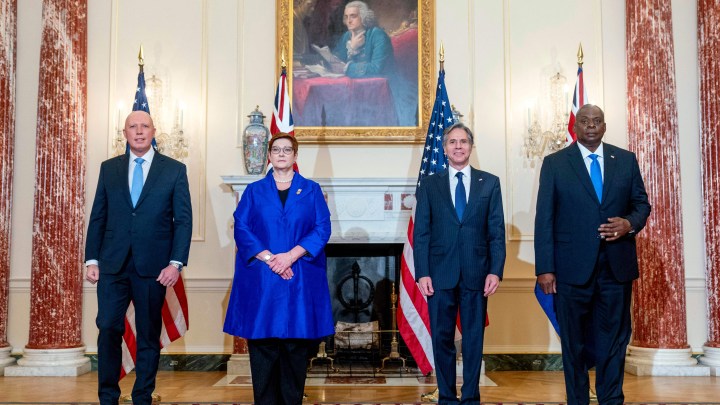 President Joe Biden and his counterparts in the United Kingdom and Australia announced a new defense partnership on Wednesday called AUKUS. Even though these English-speaking maritime powers aren’t saying it directly, this partnership is about China.

The alliance’s first big move is that the United States will share sensitive technology with Australia — technology that will help that country get new nuclear-powered submarines.

Biden administration officials said that the AUKUS partnership will include cooperation on things like cybersecurity, artificial intelligence and quantum technology.

Australia has a lot of rare earth minerals and other materials necessary for high-tech devices, he said. China currently controls the market on those resources.

“It’s also notable that China today counterpunched — in the economic, not on the military front — by formally applying to join the CPTPP,” said Robert Daly, a Wilson Center expert on China.

China is now officially asking to join what used to be the Trans-Pacific Partnership, that big trade deal former President Trump pulled out of,

“So, China is moving to build trust and to try to increase its ability to set rules in the Pacific as the United States is building a military alliance,” Daly said.

There is also likely to be a lot of money involved in the process of getting Australia’s new nuclear subs up and running.

“In order to do this deal, the Australians are canceling their existing deal to buy diesel subs from France, which at a minimum had a $50 billion — that’s with a ‘b’ — price tag,” said Richard Fontaine, CEO of the Center for a New American Security.

France is fuming about that. Plus, nuclear subs tend to be a lot more expensive, Fontaine said.