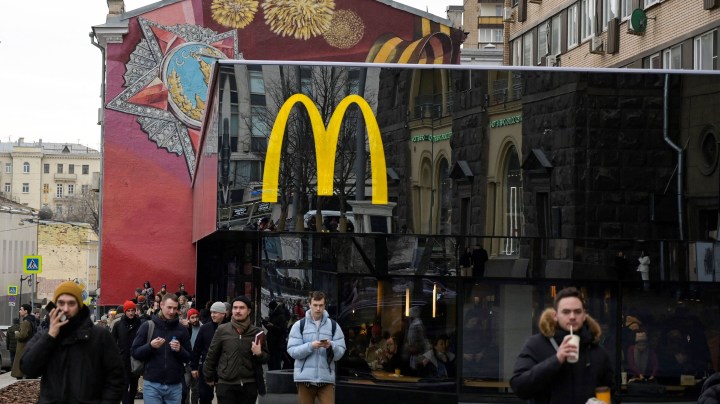 COPY
When McDonald's opened in Moscow in 1990, Russians looked at it as "a window to a different world," says Konstantin Sonin, a University of Chicago professor who grew up in Russia. Above, the Pushkin Square restaurant. AFP via Getty Images

When McDonald's opened in Moscow in 1990, Russians looked at it as "a window to a different world," says Konstantin Sonin, a University of Chicago professor who grew up in Russia. Above, the Pushkin Square restaurant. AFP via Getty Images
Listen Now

Among the many Western companies that have shut down their operations in Russia is one that was once a symbol of rapprochement between the Soviet Union and the West: McDonald’s. The burger chain has temporarily closed its 850 stores in Russia because of its invasion of Ukraine, though it’s still paying its employees.

And when it comes to closing Russia off to the West, this has significance: Mickey D’s was one of the first American brands to open there.

It’s the winter of 1990 in the Soviet Union. It’s cold. It’s dark. Food supply is unreliable. And in the middle of Moscow’s Pushkin Square, the golden arches are glowing.

“It was this oasis. Brightly lit, colorful,” said Eileen Kane, who was an American studying at Moscow State University at the time. Now, she teaches modern Russian history at Connecticut College.

She said she ate McDonald’s a few times a week because there wasn’t always enough food at her dorm. Her American dollars made McDonald’s accessible. But for the average Russian, buying a Big Mac was a stretch.

“You would see people standing in line, you know, wearing fur coats, you know, beautifully made up, on a date. It was an outing,” Kane said.

At the time, eating out in Russia was such a luxury that McDonald’s was among some peoples’ first experiences at a restaurant. Konstantin Sonin, who teaches political economics at the University of Chicago, grew up in Russia and was 18 when McDonald’s opened there. During his first visit, he got french fries.

The fast-food chain was unlike anything the Soviet Union had experienced before, he said. It was clean, the service was friendly and the packaging was all plastic foam, paper and plastic.

“In the Soviet Union, plastic bags were a kind of a very rare thing,” Sonin said. “So everything disposable was an unusual thing and an unusual concept.”

Even though Russians had an anti-American attitude, he said they looked at McDonald’s with so much hope. “They were looking at this as a window to a different world. It was suddenly the beginning of a happier, happier Russia.”

McDonald’s wasn’t affordable. But it felt democratic. For instance, it only accepted rubles, while many other restaurants prioritized more valuable forms of currency, and it helped Russians feel like change was coming. The Soviet Union dissolved just two years later.

“We forget, 30 years ago, McDonald’s was a symbol of modernity,” said Miguel Centeno, a professor of sociology at Princeton University who has studied globalization by mapping McDonald’s. “And that you have enough of an economy and enough of a society to be able to sustain it,” he said.

And sustain it they did — growing to 850 locations. Sonin said McDonald’s decision to temporarily close them earlier this month is a big blow.

“I think a lot of people consider this explicitly as the country moving backward,” he said.

And those who weren’t alive back then, Sonin added, are getting a peek at what living in Russia was like during the Cold War.