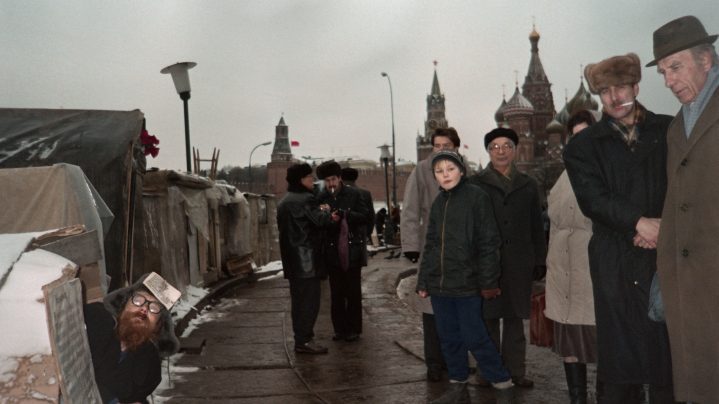 COPY
“Russia, of course, has a very long history of being excluded from the world economy,” said Kristy Ironside, an assistant professor of Russian history at McGill University. Above, Soviet citizens pass by homeless and hunger strikers in Moscow in 1990. VITALY ARMAND/AFP via Getty Images

“Russia, of course, has a very long history of being excluded from the world economy,” said Kristy Ironside, an assistant professor of Russian history at McGill University. Above, Soviet citizens pass by homeless and hunger strikers in Moscow in 1990. VITALY ARMAND/AFP via Getty Images
Listen Now

The U.S. government and its allies have imposed new economic sanctions on Russia following the country’s invasion of Ukraine. In a White House address on Thursday, President Joe Biden said that Russian President Vladimir Putin “chose this war, and now he and his country will bear the consequences.”

“At the end of the day, the people who will pay for this are Russians, ordinary Russians,” said Kristy Ironside, assistant professor of Russian history at McGill University. “They have definitely endured these kinds of crises before.”

She spoke with “Marketplace” host Kai Ryssdal about the country’s long history of economic isolation and what these latest actions will mean for the Russian people. This is an edited transcript of their conversation.

Kai Ryssdal: Let me get your thoughts, first of all, on the news of the day. The Biden administration, the latest sanctions and, specifically, knowing what you know about Russian history, how they might land over there.

Kristy Ironside: Of course, it’s all very worrying. My immediate reaction to it as somebody who studied the Soviet economy is that Russia, of course, has a very long history of being excluded from the world economy. For most of the 20th century, the ruble was nonconvertible. You couldn’t use it outside of the Soviet Union’s borders. That made them very creative in the ways that they conducted foreign trade, in the way that they developed foreign currency reserves, because they simply had to [in order] to be able to engage with the world economy. I know that this is something that the Putin government has been doing steadily since 2014, hoarding foreign currency and reducing the reliance on Western imports. This is a much longer history, in this context.

Ryssdal: There was a moment, sort of after the end of the Cold War, the collapse of the Soviet Union, they made some nods to a market economy. What was the Russian economy like when Vladimir Putin came to power, 20-something years ago?

Ironside: To put it really bluntly, it was a complete disaster. The 1990s were an extremely economically difficult time for Russians. In other parts of the rest of the world, [including] the U.S., the 90s were a relatively prosperous time. But in Russia, of course, they were coming off of aggressive shock therapy reforms to the economy, trying to make the ruble convertible but also to undo some of the subsidies and the price controls that had existed in the Soviet period. All of which really meant a much higher cost of living. It meant, also, a quick, precipitous decline in living standards in the 1990s for the average Russian.

Ryssdal: His pitch, Putin’s was — back when he first came to power — was basically economic stability, right? You’ll look at all that you just explained to us and he said, “I can take care of that. I got it.”

Ironside: Yeah, this is one of the things that he did when he came to power. He clawed back some of the wealth that had been accumulated by the oligarchs. He also created the stabilization fund, which was a massive fund of money that allows the Russian government to tide itself over, especially to tide over things like the welfare state, when there are shocks to oil prices. Because, of course, oil revenue is still one of the most important sources of income for the Russian government.

Ryssdal: OK, so how do you square the promises that Putin made with his actions now, which — and look, we’re gonna have to wait to see how this plays out — will lead to Russia being more economically isolated and having a harder time of it?

Ironside: This is the big question. At the end of the day, the people who will pay for this are Russians, ordinary Russians, who are going to see a higher cost of living, who are going to see their opportunities for travel, for leaving the country, restricted. This is going to be really tough for them. And this is coming, of course, after a period in which the economy’s already been very tough for them since 2014 and during the pandemic.

Ryssdal: We’ll note here that you are a historian of the Russian economy, you’re not an economist. So I’m going to ask you the anecdotal question and not the analytical question: You studied over there, right?

Ironside: I did. I spent a lot of time in Russia in the 2010s for dissertation research, and then I was there for a year after I finished my Ph.D., I had a postdoc there in 2014.

Ryssdal: Gotcha. Were you getting paid in rubles?

Ironside: I was getting paid in rubles.

Ryssdal: OK. You know where I’m going now, right? In 2014, the ruble fell off the table. It’s down hard today. What does that mean for, you know, the grandmother going out to buy a loaf of bread?

Ironside: It means that prices are going to go up. They’re going to be the ones who shoulder the sort of daily burden of this.

Ryssdal: One last thing and then I’ll let you go. The Russians make no secret of the fact that they like to be considered a hardy people. They’ve dealt with trauma and difficulty for literally generations, right? Do they endure this? What do you think it takes to make them say, “OK, we don’t want you anymore, President Putin.”

Ironside: I honestly have no idea. As to your first question, they have definitely endured these kinds of crises before. They have made do with less. They have grown their own food. They have, you know, eaten the Russian, domestically produced mozzarella that tastes nothing like the EU imported stuff. So I think that there is a great capacity to deal with this. But what this does in terms of confidence in the economy, confidence in the leadership? I don’t know.