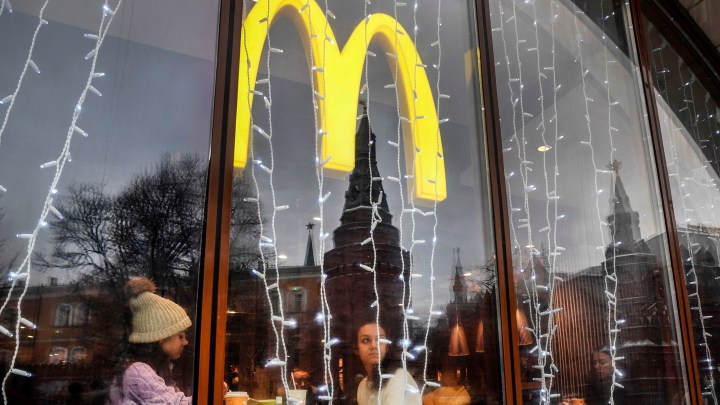 COPY
The Kremlin's towers are reflected in the window of a McDonald's restaurant in Moscow. The chain said Tuesday that it would temporarily close its Russian locations. Alexander Nemenov/AFP via Getty Images

The Kremlin's towers are reflected in the window of a McDonald's restaurant in Moscow. The chain said Tuesday that it would temporarily close its Russian locations. Alexander Nemenov/AFP via Getty Images
Listen Now

In normal times — let’s just say we haven’t seen those in a while — Russia is a huge market for big Western brands. And as the war in Ukraine continues, those brands are finding themselves in a pickle, needing to decide whether they’re going to take a stand on doing business in a country that’s become a global pariah in a matter of days.

Every day, the list of companies closing operations in Russia grows, though plenty of prominent corporations are still operating there.

Jeff Sonnenfeld and his team at the Yale School of Management are keeping a list of companies that have changed their operations in Russia, and it’s being updated around the clock. A couple of hours after we spoke, McDonald’s announced it’s temporarily closing its 850 locations in Russia.

“There’s a spectrum of approaches,” Sonnenfeld said. “Some of them have been quite noteworthy and massive.”

Take, for example, BP and Shell pulling out of operations worth billions of dollars. “On the other extreme of the spectrum, you do have places saying, ‘Well, we’re going to put on hold our future investments,'” Sonnenfeld said.

Like Yum Brands, which is putting new projects on hold but keeping over 1,000 KFC and Pizza Hut locations open. This is where business models come into play, Sonnenfeld said. Because unlike McDonald’s — which operates its own locations in Russia — Yum Brands operates under a franchise model.

“So they can control the way the product is advertised and quality standards, but they don’t have control over whether or not they’re in business because that’s what they in fact have sold,” he said.

It’s one of many complexities companies are thinking about right now. Perhaps the biggest one is how long will this war last?

According to Enno Siemsen, a professor of operations management at the University of Wisconsin-Madison, if the conflict is short and companies want to reopen their operations, “all the investments you’ve made over years are basically gone. If you want to reenter the Russian market, you’re starting more or less from scratch.”

It might be a reason that McDonald’s said it will continue paying workers while its stores are closed. Because shutting down isn’t just about pulling money out of Russia, it’s about psychological power.

“So if people in Russia right now can’t go to the mall and buy the latest smartphones anymore, they will very actively feel that they’re not part of the global community anymore due to what has happened,” Siemsen said.

Which is the point. But it may also make Russians sour on those brands for a very long time.