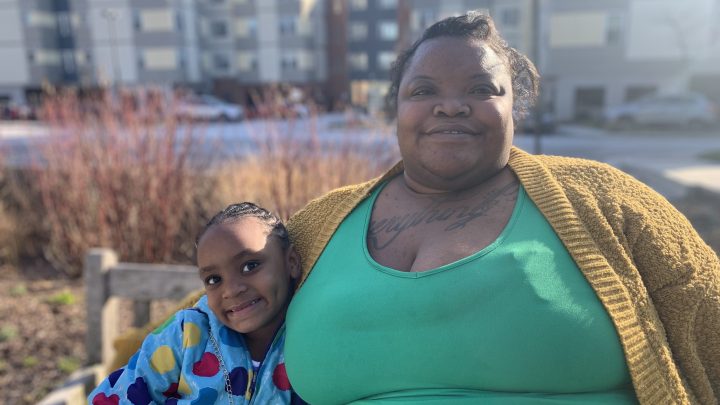 COPY
Kiarra Boulware with her young daughter, Brooklynn, at their apartment complex in Odenton, Maryland. A housing support program enabled them to move to a neighborhood with better conditions, including an improved educational environment for Brooklynn. Amy Scott/Marketplace

Kiarra Boulware with her young daughter, Brooklynn, at their apartment complex in Odenton, Maryland. A housing support program enabled them to move to a neighborhood with better conditions, including an improved educational environment for Brooklynn. Amy Scott/Marketplace
Listen Now

Five years ago, Kiarra Boulware was earning minimum wage as a part-time administrative assistant and struggling to provide for her baby daughter, Brooklynn, when she applied to a program that provides rental assistance and counseling to low-income people in Baltimore.

“For a while, I just forgot about it because, you know, you get on a waiting list,” she said. “You just wait until they call you.”

While she waited, things got worse. Her roommate moved out, and Boulware couldn’t pay the rent on her own. She and Brooklynn moved in with Boulware’s parents for a while. After that fell through, they stayed with friends or at hotels. Boulware didn’t want to stay at a shelter with a baby.

“We were officially homeless,” Boulware said. “Even some nights I would drop her off at my aunt’s house, and then I would sleep in my car.”

Then, in April 2019, her luck changed. More than two years after she first applied, Boulware got an email from the Baltimore Regional Housing Partnership. She was next in line for a housing choice voucher.

Funded by the federal Department of Housing and Urban Development, the voucher program enables very low-income families to rent housing in the private market. Recipients spend about one-third of their income on rent, and the government pays the rest.

“It was a weekend, so I couldn’t call until that Monday to make sure that it was real,” she said.

It was real, but the voucher came with strings attached. The Baltimore program is one of a handful of housing mobility programs in the country. Boulware would have to take a series of workshops — on subjects like financial literacy, home maintenance and landlord-tenant relations. And she would have to move from her distressed neighborhood in East Baltimore to an area with better access to jobs, services and highly rated schools.

“Those children were more likely to attend college, less likely to become single parents, more likely to earn more as adults compared to those who continue to live in high-poverty neighborhoods,” she said.

Limited funding means only so many families can make that move. More than 14,000 households are waiting for one of the 4,300 vouchers the program provides, Crutchfield said. Faced with so much demand, the group hasn’t accepted additions to the waiting list since 2017.

That’s a common scenario at housing agencies, according to the Center on Budget and Policy Priorities, which recently analyzed voucher waitlists around the country.

“We found over 700,000 families on these waiting lists, just at the 44 agencies that we were able to look at,” said Will Fischer, the group’s director of housing policy and research. “That’s just the tip of the iceberg.”

The 2022 spending package Congress passed this month provides funding for 25,000 new rental vouchers, along with $25 million for counseling and other services to help voucher holders move to areas with more opportunity. Advocates had hoped for much more.

“Vouchers on their own have been shown to have enormous effects in reducing homelessness and overcrowding and other problems,” Fischer said. “If they’re paired with these services, they’re even more effective in broadening choice for families and giving kids access to additional opportunities.”

But moving away from family and friends to take advantage of those opportunities isn’t easy.

The Baltimore program provides counseling to help families find housing and adjust to their new communities. Not everyone stays after the required two years. About 65% of current voucher holders live in opportunity areas, Crutchfield said.

One of them is Kiarra Boulware, who first received her voucher three years ago. Today, at 31, she and Brooklynn live in a two-bedroom apartment in Odenton, a Baltimore suburb. When she arrived, she’d call her aunt in the city and complain about being bored.

Now that they’ve settled in, Boulware likes the quiet. She writes urban fiction in her spare time. On a recent evening, she sat at her desk helping Brooklynn play a math game on her phone. Brooklynn, who’s now in kindergarten, has a learning disability, and Boulware said she’s made tremendous progress at her school.

“The opportunities that are going to be afforded to her by going to a higher-rated school, where everything is hands-on … everyone’s helping her, I think that very much benefits her,” Boulware said.

So does having stable housing. When Brooklynn came down with a bad case of COVID-19 in December and couldn’t go to school for several weeks, Boulware quit her job as a community health worker to stay home with her. Because the subsidy she gets with her voucher adjusts for a loss of income, the rent still was paid.

“I would not have been able to manage, with still having to worry about paying my bills and taking care of her at the same time,” she said.