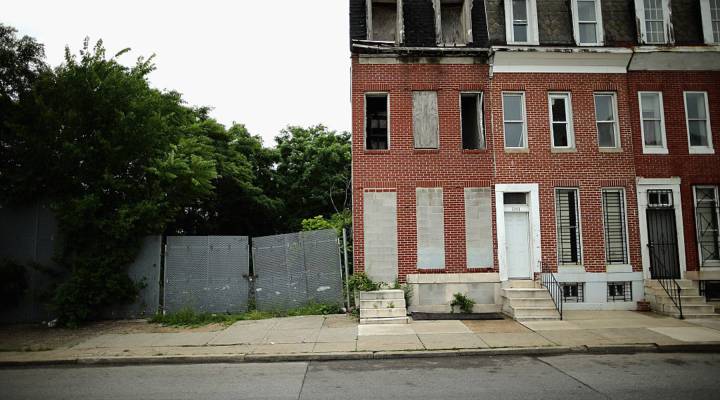 COPY
Cinderblocks wall off the door and windows of a burned and abandoned rowhouse across the street from First Mt Calvary Baptist Church, in the Winchester-Sandtown neighborhood June 15, 2015 in Baltimore, Maryland.  Chip Somodevilla/Getty Images

Cinderblocks wall off the door and windows of a burned and abandoned rowhouse across the street from First Mt Calvary Baptist Church, in the Winchester-Sandtown neighborhood June 15, 2015 in Baltimore, Maryland.  Chip Somodevilla/Getty Images
Listen Now

In many parts of the country the cost of rent is increasing faster than wages.

Couple that with a lack of affordable housing and what you have is a growing problem in the rental market—evictions.

Yet relatively little is known about the actual rate of evictions.

Which is why national real-estate company Redfin decided to do some digging. The findings of their report detail an environment that is increasingly stacked against renters.

According to Redfin, half of all renters in the U.S. are “cost burdened” —  paying at least 30 percent of income on rent. But one in four are spending more than 50 percent.

“We estimate that last year three million families were kicked out of their homes, just based on the court system,” Nela Richardson said.

Richardson is chief economist at Redfin, as well as an occasional contributor to Marketplace. She said the only way evictions can be tracked is through eviction court records. Which is what Redfin did, pulling court records from 19 states.

“But the actual number is far greater, maybe even double that number,” she said.

That’s because many evictions never make it all the way to court. People leave on their own, or maybe the landlord pressures them out.  For those that do go to court, the renter often ends up meeting a guy like Donald Rheubottom, a sheriff in the Baltimore City Sheriff’s department.

One cold fall morning  I accompanied him in his squad car across a series of Southwest Baltimore neighborhoods. He had a list of twenty evictions to carry out. At one of the first stops on the list, a man in his mid-twenties answered the door, holding a small baby in his arms.

“Hey man, how you doing? How many kids you got?” Rheubottom said. The man asked why he was there.

“I’m here for an eviction.”

Rheubottom was respectful, kind, trying his best to keep a tough situation light. Fortunately, this eviction ultimately doesn’t happen. The tenant, Andre Penn, had the $800 rent and the landlord (also present) allows him to remain in the house.

But Penn, a construction laborer, said he’s not sure about next month.

“You know, because I’ve been laid off since February, so, you know work is hard to find,” he said. “Including that, you got utility bills — gas, electric, water bills…it’s just a lot on us as a young family.”

The tenants at the next stop weren’t as fortunate. Their furniture was already packed on a truck when we arrived, a pitbull sitting in a cage on top.

One thing Rheubottom often does is hand out a printout of city services, including shelters if need be. A woman took the flier, but said the services and hotlines don’t actually provide her with what she needs most — real help to find housing she can afford.

“My job as a deputy sheriff is to make sure the process is fair,” Rheubottom said, allowing her to vent her frustration. “It ain’t to lend a hand, or do none of that. So I like to have something that I can give you. Even if it don’t amount to much, it’s something.”

Back in the squad car Rheubottom checks off another house from his list. I ask him how typical this workload is.

“It never gets light, if you know what I mean,” he said. “I might evict someone from one property one month, and then three months later I’m evicting them from another property. I’m always booked at least a month out,” he said as we moved on to the next address.

Once someone has been evicted their options often go from bad to worse. Move in with family, find a cheaper neighborhood, or possibly end up homeless.

“It takes a good amount of time and money to establish a home and eviction can just delete that,” Harvard sociologist Matthew Desmond said.

Desmond is author of the book, “Evicted.” Not only does having an eviction on your record make it hard to get a new apartment, Desmond says it can also keep you from getting federal aid. He estimates that as little as one in four who qualify for a housing subsidy actually receive it.

While renters are squeezed more and more, much of the national debate on poverty remains centered on wages, or health care.  The increasingly tough situation faced by millions of cost-burdened renters is largely absent from the overall discussion about housing.

“I think the scary thing, from a policy standpoint, is we don’t really understand how big the problem is,” Redfin’s Nela Richardson said.

With a lack of affordable housing on the market, the poorest Americans will face the toughest of choices — buy food for the family, or pay rent. Unfortunately for them, the rent always eats first.