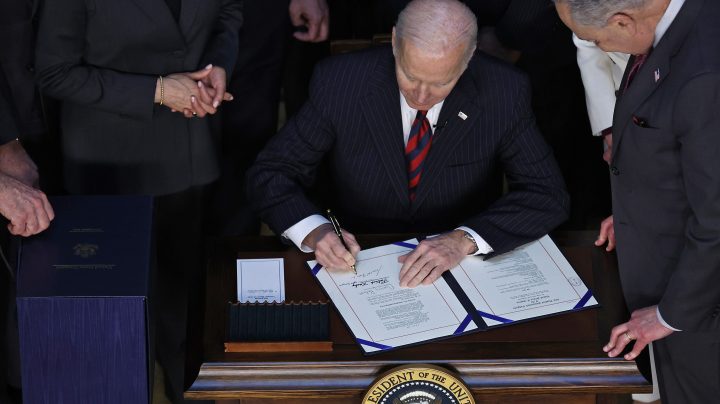 W. Gyude Moore spent nearly a decade working in the Liberian government. He said the country receives billions of dollars in foreign aid. And when you drive around the countryside, that becomes clear.

“There’s dueling signs for every government, nongovernmental organization that has provided any kind of aid. It’s a crazy thing,” Moore said.

Moore is now a senior policy fellow at the Center for Global Development in Washington, D.C. He said this kind of aid is part of how countries conduct foreign policy.

“It is about our perception, how the country is perceived overseas,” Moore said.

The U.S. spends tens of billions of dollars in foreign aid annually, distributing it to many parts of the world. Just last week, President Joe Biden signed a funding bill for the government that included $13.6 billion for Ukraine. The aid will go toward military equipment, along with food, health care and other forms of support for people displaced by the war with Russia. The goal of any kind of humanitarian aid is to help the recipients, of course. But also to get credit for helping.

America actually has a law requiring that aid purchased with U.S. funds must have a specific label.

“The Foreign Assistance Act of 1961 has a provision in it that says the United States needs to label the goods and the products that it delivers,” said Jacob Kurtzer with the Center for Strategic and International Studies.

Kurtzer knows that label — the government is one of his organization’s sponsors, too.

“The argument is, this is not charity. This is a tool of American statecraft,” said Raphael Cohen at the Rand Corp. “It’s important that the United States claim credit for the good work it’s doing in the world.”

Lots of other countries also claim credit for the blankets and boxes of food they provide, as do international organizations. Jeff Crisp, now at Oxford University, worked for the United Nations refugee agency for more than two decades. He said it has a kind of brand book.

Crisp added that this labeling of goods is old-fashioned, as is giving goods in this way. More organizations are moving toward giving cash to refugees or working with local groups to get people the things they need.

In Ukraine, that need to claim credit is understandable, said Moore, who worked in Liberia.

“I can’t imagine any country that is now sending aid in any form to Ukraine that doesn’t want to be able to show to the Ukrainian people, but also be able to demonstrate to the world, that they’ve made a moral choice here,” Moore said.

But eventually, foreign governments will need to step back and let the local government take ownership.

“When the war ends and the Ukrainians are rebuilding, it is important for them to be able to see the government they elected as the one doing things for them,” Moore said.

That’s because it’s not just physical infrastructure that’s broken during wars, Moore said. Trust in government is damaged too.