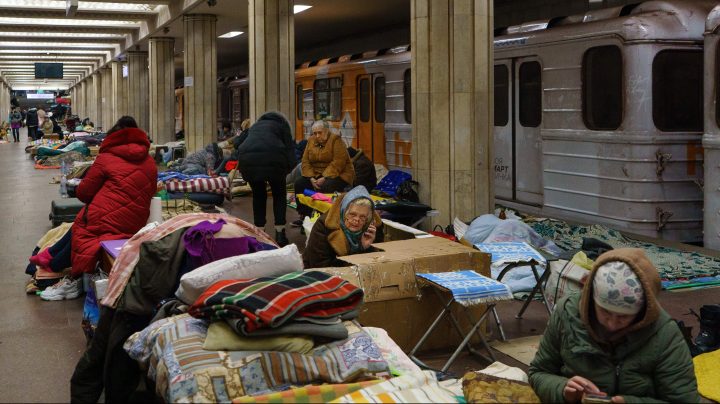 COPY
Residents of Kharkiv, Ukraine, take shelter in a metro station. As aid pours in, many experts believe money would provide the greatest benefit to victims of the war. Emre Caylak/AFP Getty Images

Residents of Kharkiv, Ukraine, take shelter in a metro station. As aid pours in, many experts believe money would provide the greatest benefit to victims of the war. Emre Caylak/AFP Getty Images
Listen Now

The phrase “humanitarian aid” likely conjures up mental images of boxes of food, blankets and tarps handed out from the back of a pickup trucks and tents where health professionals treat refugee patients.

In and around Ukraine, aid organizations are providing those things. But many are also handing out money. It’s something that was first done over a century ago, and aid groups have rediscovered the fact that in an emergency, sometimes the most useful thing can be cold, hard cash.

Since it was formed in the 1930s (at the suggestion of Albert Einstein), the International Rescue Committee has learned a lot about how aid works — and how it doesn’t work.

“When we give people blankets or plastic sheeting, what we often have seen over the years is that people just sell them to get cash,” said Bob Kitchen at the International Rescue Committee.

Kitchen estimates that up to half of the organization’s budget in the region will be used to give cash directly to refugees. That adds up to tens of millions of dollars.

“Just giving them the cash enables them to make their own decisions,” Kitchen said.

“Giving vendors the opportunity to make money, and they pay their staff — there is a virtuous cycle of investment when we give people cash,” he said.

But for all this to work, there have to be local vendors selling things that people need.

“We do monitor the markets, both of goods and services, to make sure that we can quickly adapt and scale up on the supply side in case we see that markets become dysfunctional,” said Gabriele Erba, with UNICEF. The agency plans to put $150 million toward cash assistance in Ukraine.

UNICEF uses a global data system to ensure aid is going to the right people. That’s a long way from one of the earliest examples of cash assistance.

“Clara Barton used it. She was the founder of the American Red Cross. She used cash relief as part of the Franco-Prussian War response in 1870,” said Kirsten Gelsdorf, professor of practice and director of global humanitarian policy at the University of Virginia.

But cash aid took off in the last 20 years. Daniel Maxwell studies aid as a professor at Tufts. He said such assistance was first used on a large scale in 2005, following the Indian Ocean tsunami.

“Primarily, because there was so much cash donations, that people didn’t know what else to do besides just give it to the victims of the crisis,” he said.

Now in Ukraine and surrounding countries, aid agencies are still figuring out exactly how to distribute direct assistance and whether it’ll be actual cash or some form of digital transfer or debit card.

“Visa and Mastercard both have big initiatives to be the actual conduit,” Maxwell said.

Mastercard says using virtual or physical prepaid cards is faster and more secure than actual cash and is more universally accepted across channels.

There is a potential upside for credit card companies and banks that get involved. The refugees they help could eventually become long-term customers.